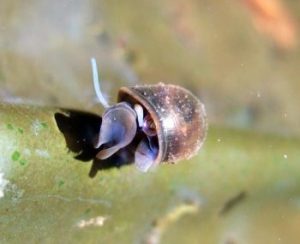 I bet if you think about an aqua safari you would imagine yourself somewhere around Tahiti, where climate is great, sun is shining and you can dive into the turquoise and crystal-clear ocean to see some colorful fishes, corals and all the funny sea creatures. We would all enjoy that, but today, I would like to invite you for a different type of Aqua Safari.

Are you ready to dive into an Organica-powered wastewater treatment plant?

The environment might not be considered attractive by a human, but actually a lot of little creatures do enjoy living there. Essentially they are all helping us to make wastewater crystal clear again, which is a great life goal, isn’t it?

For animals living underwater the most important factors are water temperature, hiding and breeding areas, amount of oxygen and type and amount of food. Municipal wastewater generally provides a pretty good habitat, because water temperature is reasonable, depending on the climate, but usually between 10-30 Celsius. Good oxygen level is secured with the air diffusers on the bottom of the reactors, which continuously provides the required oxygen level for the organisms. The amount of food is also given, the “waste” part in wastewater is all food for the bacteria.

There is only one thing missing from a traditional activated sludge plant: the hiding and breeding areas. This is the additional secret we add in an Organica-powered wastewater treatment facility. The plant roots go down to the water,perfecting the habitat for these little guys.

In a traditional activated sludge system approximately 6-800 predominantly bacterial species are living and eating the contaminants from the water. This is what we call biological wastewater treatment. Compared to the traditional system, Organica solution creates a friendlier environment with all the plants and roots, and therefore is able to invite 2-3000 species, including more complex ones.

When we enter an Organica-powered wastewater treatment plant, first we only notice the beautiful tropical plants, but never really look at what is under the water.

So, let’s who are living under the water. 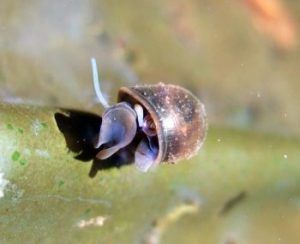 As you can see on the picture the roots are covered with a fluffy-looking substance we call biofilm. This is basically the mass of the attached organisms, such as bacteria, other microorganisms, worms, mussels, snails and even crayfishes.

Let me introduce you some of them: 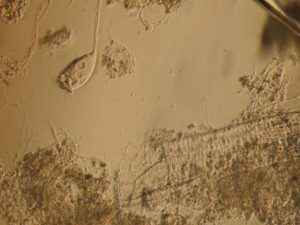 Vorticella is a genus of protozoa with the shape of an inverted bell. Vorticella are sessile (permanently attached to a substrate) organisms. However, young ones can be seen free-swimming. Adults also swim freely if their stalks are cut, or if they have to detach themselves from the substrate due to unfavorable conditions.

It is wonderful to observe how adult vorticella are attached to substrates with stalks. Vorticella species sometimes stay in clusters or groups considered as colonies, but they are not true colonies because each cell has its own individual stalk. This allows it to detach from the cluster at any time. Vorticella eat bacteria and small protozoans, using their cilia to sweep prey into their mouth-like openings. 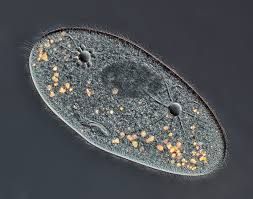 It is one of the well-studied unicellular organisms, you might know it as the slipper-shape one. The cell is covered by cilia (short, hair-like projections of the cell), which allow the cell to move with a synchronous motion (like a caterpillar). They actually can move 12x their own body length every second. They feed on smaller bacteria and algae and yeasts. The inside of a paramecium is a jelly-like fluid called protoplasm. Bits of food and other materials float around in the protoplasm, which can be seen under the microscope.

Paramecium are being tested to see if they can learn and currently it is believed that they can be taught to differentiate different levels of brightness. Great achievement from a little guy without a brain, right? 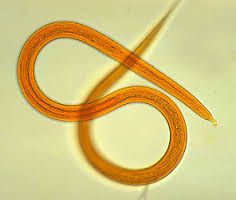 Nematoda consists of the species commonly known as roundworms. Nematodes are also extremely varied ecologically. They are found in almost every imaginable habitat. They can be herbivorous, carnivorous, or parasitic, and include both generalists (who make use of a wide variety of resources) and specialists (who make use of only particular resources). They play a particularly critical role in decomposition and nutrient cycling. 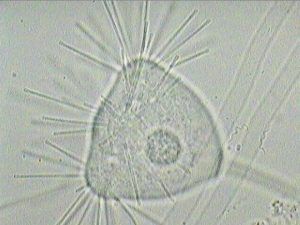 Suctoria are a type of protozoa that can be branched or unbranched. Suctoria are "inverted bell-shaped” bodies mounted on a stalk which is attached to a substratum. Although they look very pretty, watch out, well only if you are a microscopic higher life form. They are deadly! They stab unsuspecting higher life forms that swim by and suck their guts out. They have a rigid set of tentacles extending from the cell body which are hollow. They use these to spear their prey such as free swimming ciliates and flagellates.

Suctorias can be found in activated sludge wastewater treatment plants, and they are a good indicator of an extremely healthy system, where usually the BOD and TSS in the final effluent are very low and things are running smoothly. 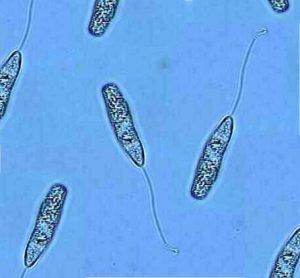 A flagellate is a cell or organism with one or more whip-like organelles called flagella.  The flagella is used for movement through the liquid or sometimes directs food into their mouth, where food is ingested. Like their relatives the amoebae, flagellates are usually present when there are large amounts of soluble food available (high BOD). They are found during start up when the sludge is young or after an upset, but will quickly predominate over the amoebae because they are more efficient feeders. 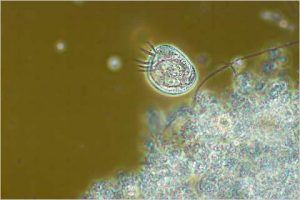 Instead of swimming around like a normal flagellate must do, Aspidisca have thick bundles of microtubules called cirri which they use as little "feet" to walk on surfaces. The main purposes of their cilia are to propel the organisms and to gather food into their mouths. They feed mostly on bacteria and other single cell organisms. They apparently love walking so much they rarely ever swim. Aspidisca in the wastewater indicates that the sludge is not young and the DO (dissolved oxygen) level is high. They are usually a sign of a stable wastewater environment and a healthy sludge. 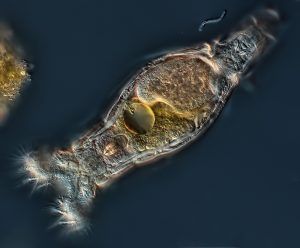 Rotifers are characterized by the possession of a ciliated area or a funnel-shaped structure at the anterior end that may look like rotating wheels and a specialized pharynx that is part of many pieces that act as JAWS. They are able to consume both microbes and particulate matter. Most rotifers are colorless, except for the eyespot. However, ingested food may sometimes give the organism the appearance of having color.

And now the fun fact: for most species of rotifers no males are known!

I think we can all agree that there are some really incredible creatures living under water. They might be small and we can’t see them with bare eyes, but it doesn’t mean that they are not important. Without these little guys biological wastewater treatment wouldn’t exist. I hope you enjoyed the splash.