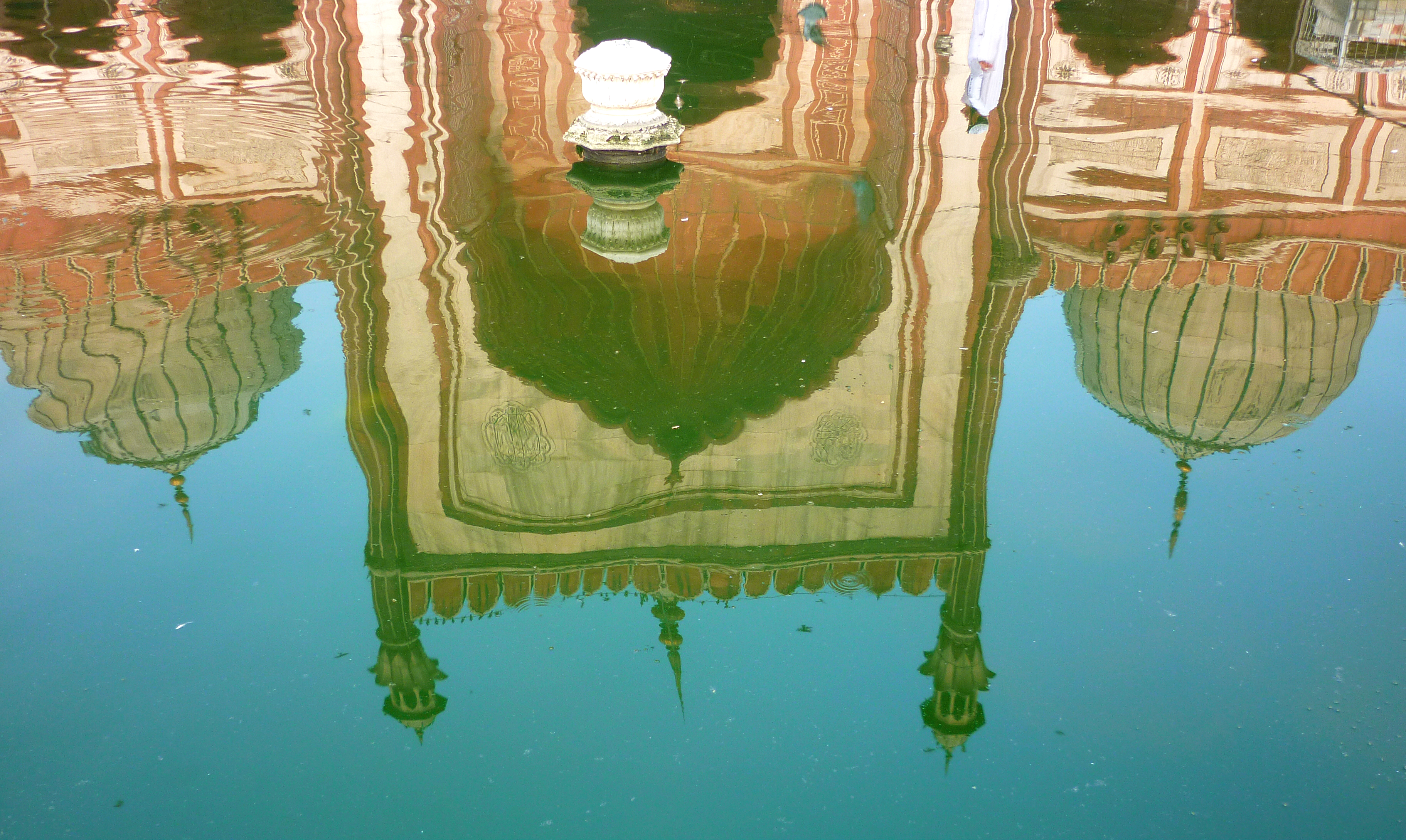 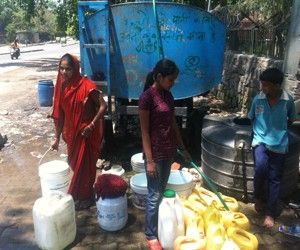 Even as this year’s monsoon rains brings relief to Delhi, its water problems are far from resolved.

It is only a matter of time that the residents in Delhi will face the wrath of depleting water supply, poor water quality and bad governance.

Unequal and unreliable water supply in Delhi represents a central paradox of metropolitan cities in India. Despite having per capita income three times the national average, Delhi struggles to provide water supply and sewage disposal services to its residents.

With a population of 16 million people, Delhi is now the second largest city in the world in terms of population. Its population is expected to reach 25 million by 2030. Given its continuing governance challenge, it is difficult to see how Delhi can plan to manage its future water needs for such larger number of people.

The Delhi Jal Board (DJB) handles drinking water supply and wastewater in the city. It is India’s largest utility and one of the world’s largest public utilities. According to official estimates, DJB has 21 lakh retail registered consumers, with some 80 per cent of the customers receiving piped water supply. The quality and regularity of this water supply leaves much to be desired. The rest of the residents, which includes people living in resettlement and unauthorized colonies or JJ clusters, are dependent on alternative water sources such as tankers and private tubewells.

Delhi’s mounting water troubles are due to multiple systemic failures for decades. There are massive water losses due to leakages, lack of metered connections, theft of water through unauthorized connections, a callous approach towards water conservation and absence of a viable financial model. Without major changes in current government practices and attitudes, urban residents will continue to face intermittent and unreliable water supply of dubious quality.

The total water demand (5818 MLD in 2011) in Delhi already outstrips total net water supply (3573 MLD in 2011). In order to handle an additional 14 million customers expected by 2030, it is essential that the government priorities are aligned correctly.

Contrary to one’s expectations, Delhi suffers from weak policy measures. The current Aam Aadmi Party (AAP) came to power on populist promises to provide free “lifeline” water supply to all households. All domestic consumers of Delhi Jal Board consuming water up to 20,000 litre per month and having functional water meters receive 100 per cent subsidy.

Access to clean water is a necessary condition for social development. However, provision of free water cannot be sustained over the long-term. Delhi’s groundwater tables are steadily declining. Additionally, Delhi depends almost entirely on neighbouring states for its raw water supply.

Without adequate water sources of its own and pending water bills that DJB has to regularly waive off, it is clear that Delhi has no excess water to provide to its residents, let alone provide for free. Official estimates from DJB show that the total distribution losses in the water sector amount to around 40 per cent.

In reality, this is likely to be much higher. This is untenable, especially as many cities in developed and developing world today have reduced water losses to the 4–20 per cent range. The focus of the government must shift to address prevailing infrastructure and governance challenges, rather than resorting to radical unsustainable populist experiments.

Delhi’s surface water sources are limited. Even then untreated wastewater is regularly being discharged into the water bodies rendering them useless for human consumption. Consider the case of Yamuna, one of the largest rivers of India that passes through Delhi and is an important source of water for Delhi and other cities.

Over decades of misuse and exploitation, the river in and around Delhi has turned into an open sewer. Ambitious plans of cleaning the Yamuna have been major failures. With only 40 per cent of the city’s sewage receiving any form of treatment before being discharged into the river, the state of wastewater treatment in Delhi is not only inadequate but also has been a complete failure.

Groundwater sources in the city are over-exploited. Haphazard urban development and continued over-extraction of groundwater by private tubewells in the absence of a systemic recharge plan have damaged groundwater tables across all parts of the city. As much as 49 per cent of the region’s wells have suffered from declining water tables, with about 67 per cent showing a decadal fluctuation (January 2006-January 2016). In South and South-west districts, the levels show a decline of more than 7 metres. Overall, Delhi’s groundwater level is depleting up to 1.44 metres per year because of uncontrolled abstraction.

Acute water shortages are not the only challenge. Continued unsustainable abstraction of groundwater has also resulted in significant source contamination. Nitrate concentration in groundwater in some areas is as high as 1500 mg/l, some 30 times above the World Health Organization (WHO) standard of 50 mg/l.

Most of the nitrate pollution, which causes health hazards especially in infants, has resulted from anthropogenic factors including improper disposal of sewage. Additionally, health risks because of declining groundwater quality are being borne primarily by the residents that are outside of DJB’s piped water supply who depend on private tankers or tubewells for regular water supply.

While inadequate policy and governance issues are major factors for poor water governance, residents exacerbate the situation further. A person can live a perfectly healthy life with 75 litres per day. Yet, a resident of Delhi consumes daily about 220 litre of water on average, almost double the amount consumed in other regions in the world according to data compiled by the Third World Centre for Water Management. People in high-income households in Delhi can use up to 600 litre.

Even the 20,000 litre of free water provided by the AAP government is estimated on the assumption that each person should receive at least 130 litres per day. There is no single reason as to why this should continue. In many European cities, such as Malaga or Leipzig, per capita daily water consumption is now 92 litre or less, and declining steadily.

Conservation measures to manage water have failed to take off despite policy and financial support. A 10-year long experiment of imposing mandatory water harvesting norms has failed to prevent groundwater tables from declining. Several bottlenecks have prevented success including delays in reimbursements, lack of citizen awareness on the dire state of water situation in the city and land ownership challenges.

In recent times, a large number of middle class houses have adopted the reverse osmosis (RO) system of water filtration given the high fluctuations in water quality. RO system is known to cause energy and water wastage as high as 40–60 per cent of water used. This can have a disastrous impact on water-stressed cities like Delhi. The reliance on such technology is growing rapidly with no appreciation of how this is becoming an emerging threat to municipal water supply.

Such factors highlight another major dilemma in water governance in various Indian cities. Urban policies in India continue to be planned and implemented independently in terms of water, land and wastewater disposal.

In the absence of a holistic systemic plan, there is no hope for a sustainable solution. There is ample evidence that water problems need to be looked from a broader perspective and there is an urgent need for inter-sectoral coordination between different government departments. There are no signs that this is likely to happen in the foreseeable future.

The water problems of India continue to be under significant political influence. An average term of a CEO at a state water board can fluctuate between a few months to two-three years at the maximum. This is inadequate for a sector like water supply that requires long-term planning and intervention.

DJB now has a remarkably competent leader, Keshav Chaudra, an unlikely occurrence that has not been seen during at least the past two decades. Under his leadership, several policy initiatives have been developed by DJB.

Some innovative measures include establishing water ATMs in the city for providing chilled drinking water. Water supply has increased from 835 to 900 MGD in 2015–2016 and water supply network is rapidly expanding to cover underserved areas. Efforts are being made to clean supplementary drains and create constructed wetlands to absorb pollutants. Citizen awareness drives and social media campaigns are being planned to reduce wastage and publicize water conservation methods such as rainwater harvesting.

For DJB to be functional and efficient, it is essential that a good CEO be installed, with a tenure of minimum six-eight years, with stipulated deliverables. DJB needs to be made an autonomous public corporation with minimum political interference. In the absence of such a framework, it is highly unlikely that Delhi will meet its growing challenges of providing clean, potable water to all its residents, as well as proper wastewater treatment and disposal.

Finally, Delhi must consider the consequences of inaction. The capital city is in a particularly precarious state given that more than 60 per cent of its water comes from the neighbouring state of Haryana. In the past years, the city has waged many battles and has witnessed spells of drastic water shortages when its supplies have been cut-off suddenly by Haryana suddenly.

The situation has been particularly strained in the last two years as Delhi has frequently found itself in the middle of the legal battle between Haryana and Punjab over the construction of the Satluj-Yamuna Link (SYL) canal which allocates shared river waters between the two states along with Delhi.

Most unfortunately, but not unexpectedly, politicians have used the situation to advance their agenda by making water a political weapon to fight petty battles. It is the citizens that are paying and will continue to pay a huge price for artificially creating water scarcity. People’s daily lives are being severely disrupted and they are left at the mercy of inter-state and inter-party politics. As recent as last year, the then deputy chief minister of Punjab, Sukhbir Singh Badal, claimed that he would not allow a "single drop of water" to flow out of the state.

With such inter-state rivalries showing signs of further aggravation in the near future, it is time Delhi plans for self-sufficiency. Some of the key measures that must be adopted include innovative tapping of alternative water sources, reducing demands and wastages significantly by focusing on water conservation methods, improving waste disposal network, instituting pricing reforms, and enforcing governmental reforms to strengthen capacity and leadership in the water department.

To look for inspiration and direction, Delhi must turn to successful examples in water management around the world. Residents in cities like Phnom Penh and Manila have access to clean drinking water which can be drunk safely from the taps for 24 hours every day. It is hard to believe that only 20 years ago, Phnom Penh suffered from nearly 83 per cent water losses due to leakages and unauthorized connections. This has now been reduced to about eighth per cent.

Similarly, other developing countries like Namibia have also shown the way for innovative measures such as large-scale adoption of water recycling for drinking purposes. Namibia’s capital city of Windhoek has successfully implemented this technology not today or five years ago, but for more than 50 years now where properly treated wastewater is being directly used for potable uses without any health concerns.

Singapore is another successful example where its water agency has taken several steps to expand water sources through water reuse, desalination and storm water storage, significantly reducing water losses to less than five per cent in the process. In 1965, Singapore and Delhi had similar levels of water services. By 1985, Delhi’s water and wastewater services had deteriorated seriously but Singapore’s had improved tremendously to become one of the best in the world.

Delhi’s water management requires good and continued leadership, innovation, investment funds, political will and continuing good management. Without these factors, DJB’s aspirations of providing residents with safe drinking water will not only remain a distant dream but also its water provisioning is highly likely to deteriorate significantly during the next two decades.