Some Farmers Are Trying to Prepare for Climate Change But Getting Pushback from Neighbors, Families—and the Government 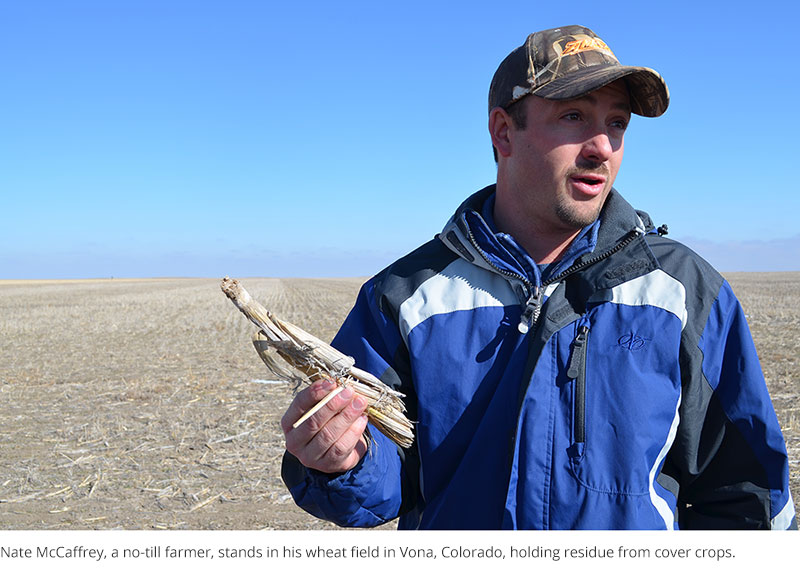 "Dryland" farmers on the high plains of Colorado grow their crops with whatever falls from the sky—no irrigation, no pumped groundwater—just what Mother Nature delivers. In recent years some have been trying to innovate to protect their soils and conserve water to prepare for climate change. But they're getting pushback —not only from their neighbors and their own families—but also from the government.

Nate McCaffrey wasn’t around in a time people call the “Dirty Thirties”—the Dust Bowl era, when the drought-stricken plains lost tons of topsoil. But he can imagine it. McCaffrey is a farmer in his mid-thirties and he grew up in eastern Colorado. He's seen that when the wind really blows, the air would turn brown, and there would be a 3-inch rain after which they would spend the next two weeks pulling dirt out of the fields that washed down to the bottom.

The eastern plains of Colorado are a world away from the Rocky Mountains for which the state is famous. It’s flat, wide-open grassland, and if there is a tree on the horizon it was probably planted there by a human to offer respite. It’s an unforgiving place to do agriculture—but many do—practicing something called “dryland farming,” in which people like McCaffrey’s family grow wheat, millet, sunflowers, and corn using  only  what falls from the sky.

“Mother Nature only provides a certain amount of moisture, and we have to use it to the best of our ability and be creative,” McCaffrey says. Because water is so scarce on the high plains, being “creative” means that most farmers there have adopted the practice of fallowing their fields to bank the rain that does fall to save it in the soil for the next year’s crop. After harvest, the soils are tilled and then left to “rest,” so to speak, and often sprayed with herbicides to suppress weeds. The result: for over a year the ground is virtually bare and lifeless. Fallowing was stressful. McCaffrey said, “Growing up on a farm all my life, all I ever knew was going out during that fallow period and stressing about trying to kill every weed out there and keep the ground as bare and clean as you could keep it because you were using moisture.”

To Till, or Not to Till—That Is the Question

So when it was time for McCaffrey to go out on his own, he was conflicted about sticking with the so-called “conventional" way of farming, which required tilling and a fallow rotation. It got to a point after being out in his fields night and day tilling the ground, that he’d ask himself, “What good am I doing? Am I just out here trying to raise a crop? Am I just out here trying to create revenue? Or am I actually working toward something that somebody is going to care about in the future?”

Listen to the radio piece or read the full story: http://h2oradio.org/Dryland.html