The Holy See and the Global Environmental Movements 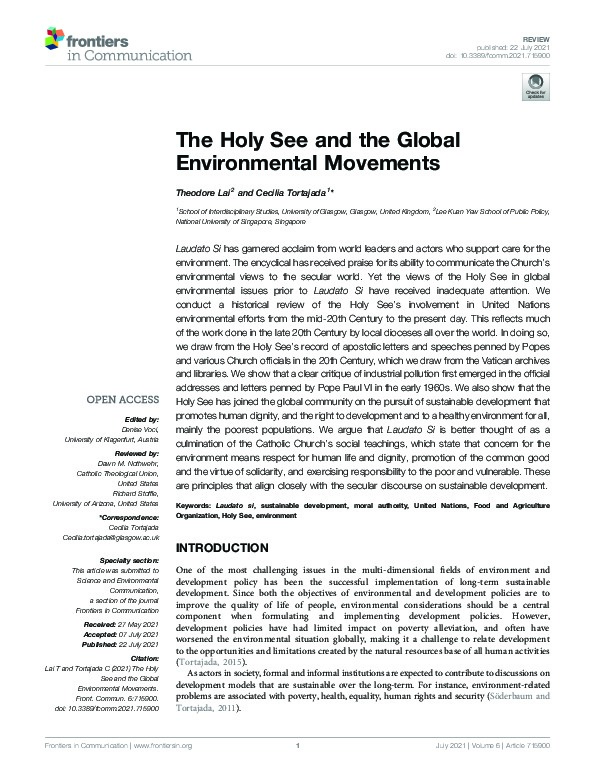 Laudato Si has garnered acclaim from world leaders and actors who support care for the environment. The encyclical has received praise for its ability to communicate the Church’s environmental views to the secular world. Yet the views of the Holy See in global environmental issues prior to Laudato Si have received inadequate attention. We conduct a historical review of the Holy See’s involvement in United Nations environmental efforts from the mid-20th Century to the present day. This reflects much of the work done in the late 20th Century by local dioceses all over the world. In doing so, we draw from the Holy See’s record of apostolic letters and speeches penned by Popes and various Church officials in the 20th Century, which we draw from the Vatican archives and libraries. We show that a clear critique of industrial pollution first emerged in the official addresses and letters penned by Pope Paul VI in the early 1960s. We also show that the Holy See has joined the global community on the pursuit of sustainable development that promotes human dignity, and the right to development and to a healthy environment for all, mainly the poorest populations. We argue that Laudato Si is better thought of as a culmination of the Catholic Church’s social teachings, which state that concern for the environment means respect for human life and dignity, promotion of the common good and the virtue of solidarity, and exercising responsibility to the poor and vulnerable. These are principles that align closely with the secular discourse on sustainable development.