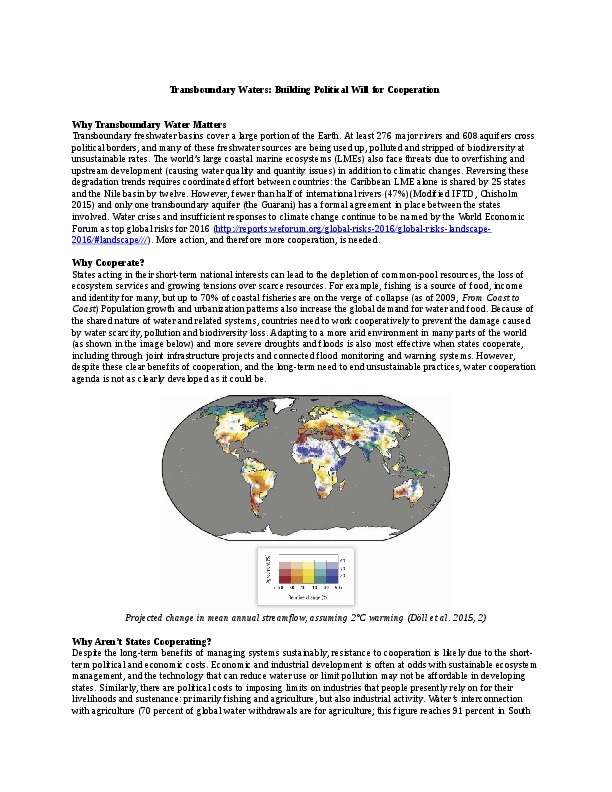 Transboundary freshwater basins cover a large portion of the Earth. At least 276 major rivers and 608 aquifers cross political borders, and many of these freshwater sources are being used up, polluted and stripped of biodiversity at unsustainable rates. The world’s large coastal marine ecosystems (LMEs) also face threats due to overfishing and upstream development (causing water quality and quantity issues) in addition to climatic changes. Reversing these degradation trends requires coordinated effort between countries: the Caribbean LME alone is shared by 25 states and the Nile basin by twelve. However, fewer than half of international rivers (47%)

(Modified IFTD, Chisholm 2015) and only one transboundary aquifer (the Guarani) has a formal agreement in place between the states involved. Water crises and insufficient responses to climate change continue to be named by the World Economic Forum as top global risks for 2016 (http://reports.weforum.org/global-risks-2016/global-risks-landscape-2016/#landscape///). More action, and therefore more cooperation, is needed.

States acting in their short-term national interests can lead to the depletion of common pool resources, the loss of ecosystem services and growing tensions over scarce resources. For example, fishing is a source of food, income and identity for many, but up to 70% of coastal fisheries are on the verge of collapse (as of 2009, From Coast to Coast) Population growth and urbanization patterns also increase the global demand for water and food. Because of the shared nature of water and related systems, countries need to work cooperatively to prevent the damage caused by water scarcity, pollution and biodiversity loss. Adapting to a more arid environment in many parts of the world (as shown in the image below) and more severe droughts and floods is also most effective when states cooperate, including through joint infrastructure projects and connected flood monitoring and warning systems. However, despite these clear benefits of cooperation, and the longterm need to end unsustainable practices, water cooperation agenda is not as clearly developed as it could be. Despite the long-term benefits of managing systems sustainably, resistance to cooperation is likely due to the short-term political and economic costs. Economic and industrial development is often at odds with sustainable ecosystem management, and the technology that can reduce water use or limit pollution may not be affordable in developing states. Similarly, there are political costs to imposing limits on industries that people presently rely on for their livelihoods and sustenance: primarily fishing and agriculture, but also industrial activity. Water’s interconnection with agriculture (70 percent of global water withdrawals are for agriculture; this figure reaches 91 percent in South Asia)

(FAO AQUASTAT) and energy systems also complicates planning. This complexity adds to the ‘transaction costs’ of negotiating agreements, and it takes a strong political will to overcome administrative and economic pressures to maintain the status quo.

However, there are ways to address these barriers, making it easier for governments to enter into negotiations and to reach mutually acceptable, environmentally sustainable water agreements. There is no shortage of creative technical solutions for reducing water use (as seen in California’s water use reductions as the population has increased) or reducing flood and drought vulnerability (such as the EU’s comprehensive flood risk reduction programme).

Freshwater supply can also be increased through water recycling, fit-for-purpose uses, or renewable-energy powered desalination. But for these solutions to be implemented, political support is needed. Building this support requires:

Mitigating short-term economic costs. Non governmental organizations including the Global Environment Facility (GEF), World Bank and United Nations have a successful history of helping states to implement sustainable initiatives. For instance, the Mekong Integrated Water Resource Management, Transboundary Projects funded by World Bank (2013) and facilitated by the Mekong River Commission Secretariat are a recent initiative to undertake baseline studies for identifying significant water resource management issues common to member states. In the Caribbean marine environment, UNEP and UNDP supported the GEF in providing not only technical support but also guidance for countries to bring their legal frameworks in line with environmental best practices (From Coast to Coast, 57).
Reducing domestic political costs. This can be done through public education campaigns that make the benefits of adaptation clear. Subsidies or support for sustainable economic activity (Point 1) can also increase public support of changes.
Removing barriers to negotiation. Countries with less data than their negotiating partners may be hesitant to agree to a deal that may be unfair. Third-party mediation and joint data collecting can reduce this risk, while providing opportunities for professionals and government officials to meet and build trust. For example, the regional geopolitics in the South Asian trans-boundary has for long acted as a deterrent in consensus building.
Supporting informal networks and other ‘social’ factors that promote cooperation. For example, states often enter agreements as a symbolic act, to show their alliance with other states or with international norms (Subramanian et al., 2014). These symbolic and social factors should not be discounted and nongovernmental organizations (NGOs) should consider these inexpensive, effective methods in promoting cooperation (such as through recognizing success cases)

The economic gains from cooperation over water resources, compared to fragmented approaches, are clear: in 2006, the UNDP reported that direct losses from a lack of water cooperation in Central Asia were US$1.75 billion per year, or 16% of the water sector’s direct contribution to GDP (Water Cooperation, 19).

The longterm benefits (to human life and the environment) of sustaining ecosystems are also clear. However, in practice, this type of ‘rational’ cost-benefit analysis does not appear to motivate governments to enter cooperative agreements. Short-term thinking, as well as informational and social barriers to cooperation can be addressed through greater information exchange and NGOs promoting public and government awareness of the benefits of cooperation.

There is room for improvement at the global level as many sources of international development funding have not integrated environmental considerations and ecosystem services into their calculations for example, national policies aimed at environmental protection have been challenged and overturned under trade agreements including the North American Free Trade Agreement (NAFTA); similar challenges to environmental policy could be made under the TransPacific Partnership currently in negotiations. Foreign aid sometimes depends on GDP growth with no consideration of ‘green GDP’type environmental sustainability metrics (Boyd and Banzhaf 2007), resulting in some developing states pursuing hydropower development to secure GDP growth and continuing international support, regardless of the environmental impacts. All economic valuations should take environmental considerations into account, recognizing the real costs of the loss of ecosystem services. Economic development can no longer be pursued without considering ecosystem sustainability and changing climatic patterns, as the costs of further degradation are high and possibly irreversible.

The United Nations Sustainable Development Goals for post2015 development make this point clear, but international and national economic policies are a major barrier to achieving these goals.

The fundamental roadblock to nations entering cooperative environmental agreements is the trade-off between short-term and longterm needs. The good news is that with nongovernmental and international support, sustainable management of Transboundary Waters could be achieved. Investments in infrastructure that reduce water wastage or uses water more efficiently in irrigation, among other changes, bear short-term costs but can save money in the long term. Investments in cooperation and sustainability do pay off; take the case of transboundary water institution in Africa- the Southern Africa Benguela Current Commission that started with an external funding and later become financially self-sufficient (From Coast to Coast). What is required is a solution mix of ‘grey’ (manmade) and ‘green’ (natural) infrastructure, backed by scientific data, information and knowledge.