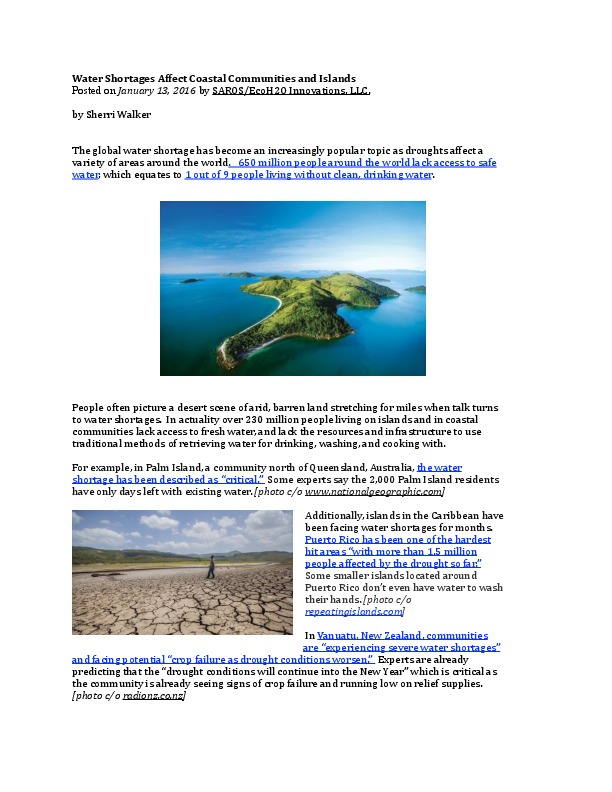 People often picture a desert scene of arid, barren land stretching for miles when talk turns to water shortages.  In actuality over 230 million people living on islands and in coastal communities lack access to fresh water and lack the resources and infrastructure to use traditional methods of retrieving water for drinking, washing, and cooking with.

For example, in Palm Island, a community north of Queensland, Australia, the water shortage has been described as “critical.”  Some experts say the 2,000 Palm Island residents have only days left with existing water.

Additionally, islands in the Caribbean have been facing water shortages for months.  Puerto Rico has been one of the hardest hit areas “with more than 1.5 million people affected by the drought so far.”  Some smaller islands located around Puerto Rico don’t even have water to wash their hands.

In Vanuatu, New Zealand, communities are “experiencing severe water shortages” and facing potential “crop failure as drought conditions worsen.”  Experts are already predicting that the “drought conditions will continue into the New Year” which is critical as the community is already seeing signs of crop failure and running low on relief supplies.

Other exotic coastal areas, such as Brazil and the Seychelle Islands, are also dealing with near-emergency levels of water shortages.

While large, developed cities often have the means to implement and support expansive water solutions these smaller island areas often do not have the necessary infrastructure or financial resources necessary for these sizable solutions.  These case studies show the compelling need for small-scale solutions to provide fresh water for smaller island and coastal communities facing water shortages.

One example of a technology focusing on this niche market is the SAROS unit.  The team at EcoH2O Innovations has developed SAROS (Swell Actuated Reverse Osmosis System), a small-scale desalination unit that uses only the energy from ocean waves to produce fresh water from ocean water.  It is a logistically efficient solution that provides a consistent supply of new, fresh water, rather than reusing current water reserve, bringing desalination to areas that otherwise lack access.

Many islands and smaller coastal communities lack a reliable, pre-existing source of clean, fresh water as well as resources to facilitate large-scale solutions such as industrial-size desalination plants.   These communities often rely on importing water, exposing them to high costs and leaving them vulnerable to market volatility.  Allowing a community to manage their own water supply increases water security, empowers individuals, and can assist in growing local economies.  The SAROS technology is specifically designed to be maintained with basic instructions and common tools so that communities can sustain their own water resource.

The SAROS team is currently testing their second prototype design and predicting an estimated output of 2000-5000 gallons a day.  With the WHO and UN estimating 6-13 gallons of water is needed per person per day, one SAROS unit would provide drinkable water to 270-580 persons daily.  In times of emergency, 2-4 gallons per day are needed per person meaning SAROS could provide fresh water for 500-2,500 people in a disaster situation.  SAROS’ ability to group machines enables communities to expand the outreach of the unit.

For coastal and island communities facing water shortages, this type of innovative, sustainable, and environmentally-friendly solution is invaluable.

Sherri Walker is a Communication Specialist and Blogger for Eco-H2O Innovations LLC.