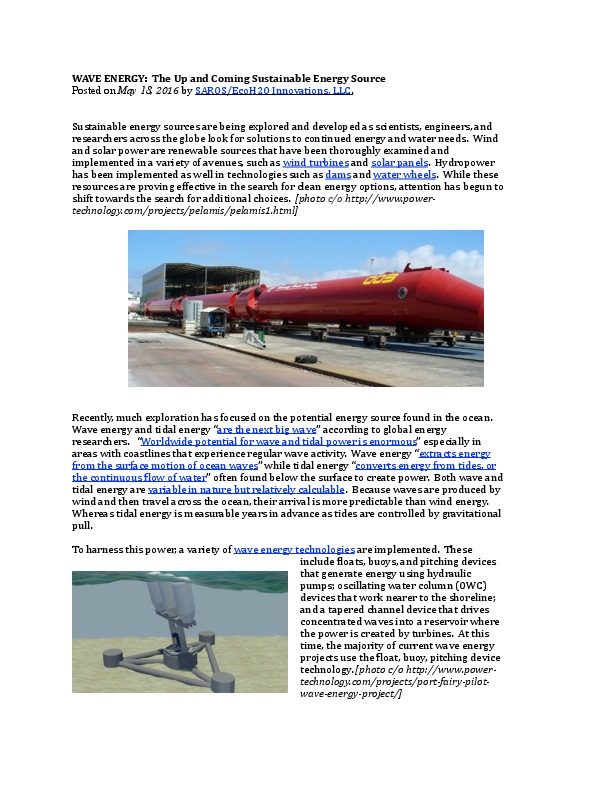 Blog post exploring Wave Energy technology, citing examples of wave energy being implemented around the globe, and discussing obstacles to this up and coming energy source:

To harness this power, a variety of wave energy technologies are implemented. These include Iloats, buoys, and pitching devices that generate energy using hydraulic pumps; oscillating water column (OWC) devices that work nearer to the shoreline; and a tapered channel device that drives concentrated waves into a reservoir where the power is created by turbines.

Examples of wave energy ventures can be found across the globe. A wave farm operating off the coast of Portugal that operated from 2008-2009 was seen as “the world's Iirst commercial wave energy project.” Portugal is seen as an ideal location to beneIit from wave power as the country has large, powerful waves along its extensive Atlantic coastline. In February 2015, the Perth Wave Power Project (PWEP) began operation off the coast of Australia. Developed by Carnegie Wave Energy, the electricity generated by the project is “sufIicient to power approximately 3,500 households.“ South Korea and China are both viewed as ideal locations for wave energy projects, areas that could beneIit greatly from the impact of the alternative “green fuel” source, with Blue Energy currently working on a tidal energy generating bridge across China’s Bohai Strait. Additionally, valuable research is being gathered at wave energy projects off the coast of Scotland, while plans for a wave energy plant to be built in South Africa are also underway. In the United States, a wave energy project is being developed off the Oregon coast.

In addition to supplying electricity, some companies are exploring the use of wave and tidal energy to produce fresh water. Currently over 700 million people across the globe do not have access to clean water. Researchers are looking for sustainable solutions to this pressing need. The Carnegie Wave Energy project operating off the coast of Australia not only makes electricity but also runs “a desalination plant that transforms seawater into about one-third of the [nearby Garden Island military] base’s fresh water supply.” In addition, Eco-H2O Innovations has built a desalination unit that desalinates ocean water using only the power of ocean waves. The SAROS unit (Swell Actuation Reverse Osmosis System) is designed to beneIit smaller coastal and island communities facing water shortage issues that do not have the infrastructure to support large-scale desalination plants. These projects show the potential wave energy has for impacting social needs.

Though wave energy is still largely experimental, it is being viewed as a promising source of renewable energy.  Wave energy research has lagged behind other renewable sources such as wind and solar power, but has made steady progress over the past decade. Jason Busch, executive director of the Oregon Wave Energy Trust, a non-proIit group dedicated to helping advance the industry, says, “In the course of 10 years we have gone from having zero wave energy technologies that are even remotely viable to having several in the water, and on the cusp of commercial viability.” A recurring message among wave energy experts is that “wave energy is where wind energy was three decades ago.” Like all new technologies, large amounts of money, time and research are necessary for wave and tidal energy to catch up to other renewable energy sources. “What is needed is a well-thought-out wave energy strategy by governments,” said Tom Thorpe, founder of Oxford Oceanics, a wave energy consulting Iirm in Britain. “It’s not rocket science. It’s what the Danish government did with wind energy.”

Sherri Walker is a Communication Specialist and blogger for SAROS/Eco-H2O Innovations, LLC.  www.sarosdesalination.com