Change of the Climate 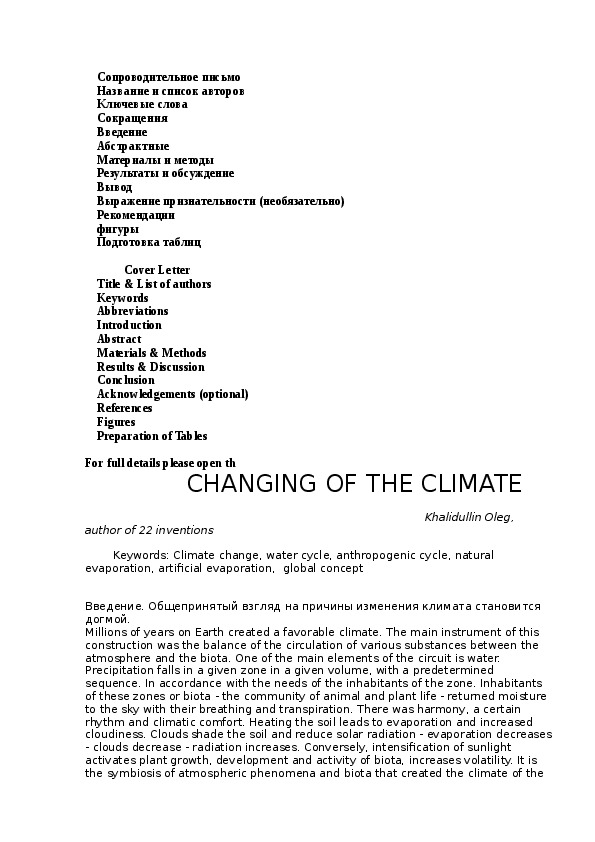 Climate change is the result of unreasonable human impact on natural resources.

It is necessary to pay attention to the main component of nature - water, as the most common and most necessary product of all living things on Earth

The water was created in a long-term interaction with the biota.

Man with his appearance began to use water as a working reagent. Washing, drying, heating, squeezing is a number of technological processes in which water is used as a physical object. The incoming water with precipitation evaporates back into the atmosphere without performing its functions - passing through food chains. Water must have a full cycle of transformations. The reduced or withdrawn element of the transformation increases in volume and speed of turnover with each passing year, every day. Unnatural evaporation fills the surface layers of the atmosphere, create their mindless water cycle, which is the cause of the growth of natural disasters and the approaching world catastrophe.

"Green technologies", reducing emissions of carbon dioxide and other gases - all these activities are private components in the cycle of substances. Of course, they are important, but in essence they are microscopic in terms of volume and degree of impact in comparison with the change in the parameters of evaporation.

The second, if not the first, especially important human impact on evaporation is the consequences of the increase in arable land, the destruction of forests, the filling of new reservoirs and a host of other ways to destroy the territories of one's own residence.

A person needs to reconsider their actions and urgently create a new concept for returning water to its natural functions. The main components in the new Concept should be the urgent stoppage of all processes for the destruction of land. We have already killed 67% of the fertile soil, each hectare of which contains 20 tons of underground living creatures.