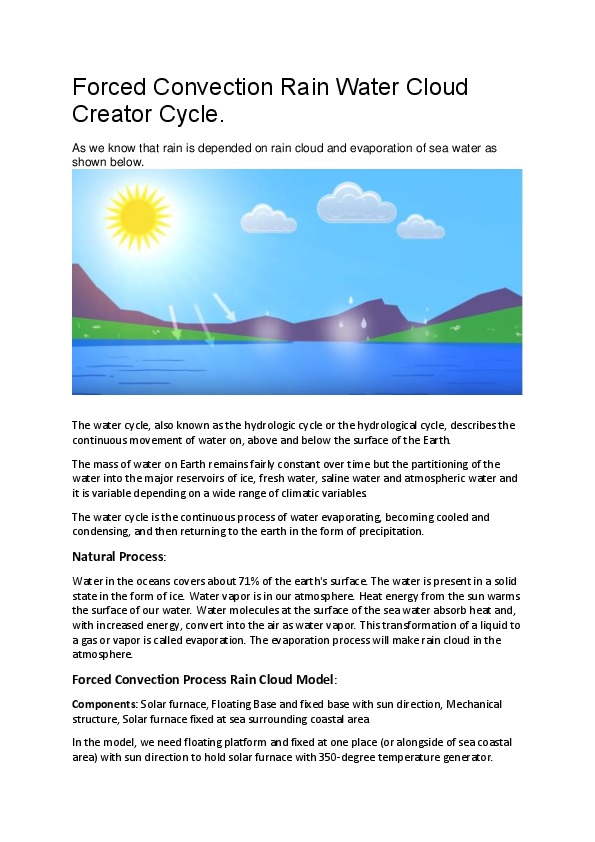 As we know that rain is depended on rain cloud and evaporation of sea water as shown below.

The water cycle, also known as the hydrologic cycle or the hydrological cycle, describes the continuous movement of water on, above and below the surface of the Earth.

The mass of water on Earth remains fairly constant over time but the partitioning of the water into the major reservoirs of ice, fresh water, saline water and atmospheric water and it is variable depending on a wide range of climatic variables.

The water cycle is the continuous process of water evaporating, becoming cooled and condensing, and then returning to the earth in the form of precipitation.

Water in the oceans covers about 71% of the earth's surface. The water is present in a solid state in the form of ice. Water vapor is in our atmosphere. Heat energy from the sun warms the surface of our water. Water molecules at the surface of the sea water absorb heat and, with increased energy, convert into the air as water vapor. This transformation of a liquid to a gas or vapor is called evaporation. The evaporation process will make rain cloud in the atmosphere.

In the model, we need floating platform and fixed at one place (or alongside of sea coastal area) with sun direction to hold solar furnace with 350-degree temperature generator. When sun light is follows on it, on sea water surface 350-degree temperature will start generating. Water molecules at the surface of water absorb heat and convert rapid into the air as water vapor.

The water vapor molecules rise into the air and cone into contact with areas of low pressure. The air expands and becomes cooler by heat loss due to radiation.

The water molecules collect in the form minute droplets and this transition of a vapor into a liquid with condensation form. when the condensation vapor occurs around tiny water droplets particles above the earth’s surface, a rain cloud is formed.

After this process, water vapor start accumulation in air and rain cloud created.

This process will be fast than natural process. It will create more rain cloud in the area.

In the clear weather it will have fast process and vice versa.

It will utilize in the day time only not in the night. We have studied no effect of solar furnace in the sea life and but as per my understanding the furnace temperature will be on surface sea water level and it will  not go in the depth in the sea.

We can survey the Sea area and we can implement this model and that Area will have more rain cloud to process more rain. Cost wise very economical project than desalination project. Maintains cost also very low. A lot of dynamics parameter should be considered to implement it. It is only concept note.