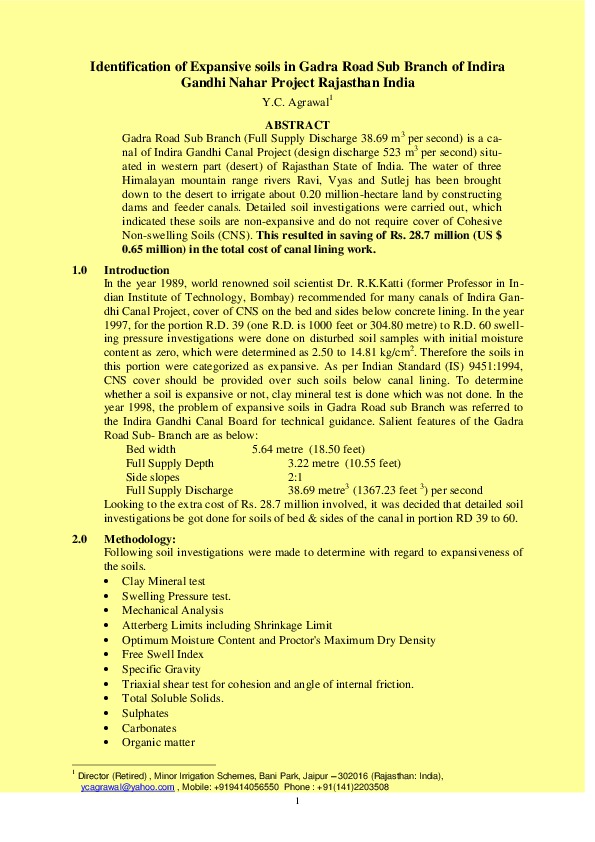 In the year 1989, Dr. R.K.Katti (former ) Professor in Indian Institute of Technology, Bombay recommended for many canals of Indira Gandhi Canal Project, cover of CNS on the bed and sides below concrete lining. In the year 1997, for the portion R.D. 39 to R.D. 60. "swelling pressure" tests were done on disturbed soil samples with initial moisture content as zero, which were determined as 2.50 to 14.81 kg/cm2. Therefore the soils in this portion were categorized as expansive. As per Indian Standard (IS) 9451:1994, titled GUIDELINES FOR LINING OF CANALS IN EXPANSIVE SOILS (which was basically prepared by Dr R.K. Katti) CNS cover should be provided over such soils below canal lining.

To determine whether a soil is expansive or not, clay mineral test is essential, which was not done.

In the year 1998, the problem of expansive soils in Gadra Road sub Branch (Full Supply Discharge 38.69 m3 per second ) of IGNP was referred by the Chief Engineer IGNP, Er. O.P. Singhal, to the Indira Gandhi Canal Board for technical guidance. The Chairman Er. A.S. Kapoor assigned the problem to me, as I was working as Superintending Engineer (Planning) in IGNB.

The basic properties of an expansive soil are

(2) Clay Mineral Test – As per IS 2720(Part XLI) – 1977,titled “ MEASURMENT OF SWELLING PRESSURE OF SOILS” swelling pressure is dependent on nature of clay mineral and type and amount of clay in the soil. The soils can be termed as expansive, if it contain clay mineral Montmorillonite and Illite

I myself measured the Free swell Index of soil samples collected by me from the portion R.D. 39 to R.D. 60, during my field visit. Free Swell Index was lower than 100 indicating soils are non-expansive.

The clay mineral test was got done on many samples of portion RD 39 to 60 in GSI laboratory at Jaipur, Rajasthan. Clay mineral Montmorillonite and ILLITE were present in traces / small quantity only, indicating soil is non-expansive.

In the 31st meeting of the Standing Technical Committee, Indira Gandhi Nahar Board held on 18th August, 1998 under the chairmanship of Er A.S. Kapoor, Committee decided to do away with the CNS layer and instead provide a cover of locally available sandy soil in the reach and do c.c. lining as usual. I submitted verbally my findings before the committee as per directions of then Chairman A.S. Kapoor, about the soil in the portion of Gadra aod sub branch under consideration

This resulted in saving of Rs. 2.87 crore in the total cost of canal lining work.

If any person Is interested to know more, he can write to me atycagrawal@yahoo.com . An article written by me is also available at google drive at https://docs.google.com/.../0B7OEEuzHbopKMVdBWDlQ.../edit.... Title of the article is IDENTIFICATION OF EXPANSIVE SOILS IN GADRA RAOD SUB BRANCH OF IGNP                                        The main purpose to highlight this case was to emphasize the need to study a problem in depth, at least at the level of Superintending engineer and Chief engineer. Both the offices did not gave proper attention to the problem. The comments of our colleague Shri Mohan Lal indicate the views of IGNP prevailing at that time. The IGNP engineers obeyed the advice of Prof R K Katti and if I have done the same, the unscientific thinking would have prevailed till now resulting in waste of billions of rupees and additional time of 1 to 2 years for providing CNS layer. As member of Technical committee for WRD 13 of Bureau of Indian Standard , I suggested many basic changes in IS 9451 to the committee , which were considered and some changes were made, not all the suggestions I made. The Free Swell Index Test is very simple and can be done at field by any junior engineer. Swelling Pressure test was to be done to know extent of expansiveness of a soil, not to decide whether a soil is expansive or not ?