Latrines v. Wells in India - Any good experiences or water source protection methods from there or elsewhere? 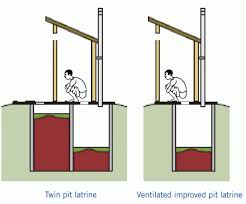 The issue of the separation distance between boreholes/wells and contamination sources has always been a thorny one, but it looks like India’s current sanitation drive is raising the issue up the agenda: A toilet or safe drinking water?

The stark choice facing many people in rural India: https://www.theguardian.com/global-development/2016/jul/25/india-sanitation-drive-toilet-or-safe-drinking-water-stark-choice

Abstract:
Surface and groundwater contamination with fecal pathogens is a public health concern especially in low-income settings where these sources are used untreated. We modeled observed  Cryptosporidium and  Giardia contamination in community ponds ( n = 94; 79% contaminated), deep tubewells (DTWs) ( n = 107; 17%), and shallow tubewells (STWs) ( n = 96; 19%) during the 2012 and 2013 monsoon seasons (June–August) in 60 villages in Puri District, India to understand sources and processes of contamination. Detection of  Cryptosporidium and/or  Giardia  in a tubewell was positively associated with damage to the well pad for DTWs, the amount of human loading into pour-flush latrine pits nearby (≤15 m) for STWs, and the village literacy rate (for  Giardia  in STWs). Pond concentration levels were positively associated with the number of people practicing open defecation within 50 m and the sheep population for Cryptosporidium , and with the village illiteracy rate for  Giardia . Recent rainfall increased the risk of  Cryptosporidium  in STWs (an extreme event) and ponds (any), while increasing seasonal rainfall decreased the risk of  Giardia  in STWs and ponds. Full latrine coverage in this setting is expected to marginally reduce pond  Cryptosporidium  contamination (16%) while increasing local groundwater protozoal contamination (87–306%), with the largest increases predicted for Cryptosporidium  in STWs.