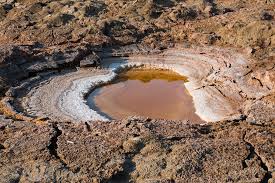 A new publication of Hilmi S. Salem on sinkholes in the Dead Sea Basin.

Over the last few decades, thousands of sinkholes have developed at an increasing pace, with the majority along the western and eastern shores of the Dead Sea. Recent studies indicate that the number of sinkholes in the Dead Sea Basin (DSB) has reached more than 6000; each of them, on average, 1–10m deep and up to 25–30m in diameter. These sink-holes can open-up suddenly and swallow whatever exists above them, resulting in an area that looks like an earthquake zone. Sinkholes in the DSB are formed when a subterranean salt layer that once bordered the Dead Sea is dissolved by underground freshwater that follows the migration of the saltwater–freshwater interface, due to receding water level of the Dead Sea. Consequently, large areas of land are subsiding, causing the formation of sinkholes in the region.

Also,based on the fact that the Dead Sea’s region is tectonically and seismically active, as being greatly aected by the Dead Sea transform fault system, sinkholes can also be evolved as a result of tectonic and seismic activities.

This paper presents multi- and inter-disciplinary approaches towards understanding the occurrence of sinkholes in the DSB, with respect to geomorphology, geology, geophysics, tectonics, seismology, limnology, climatology, biodiversity, and socioeconomics, as well as the steady decline of the Dead Sea’s water level and the continuous shrinkage of its surface area and its water volume, at alarming rates. The occurrence of sinkholes in this region could be attributed to anthropogenic reasons and/or natural reasons