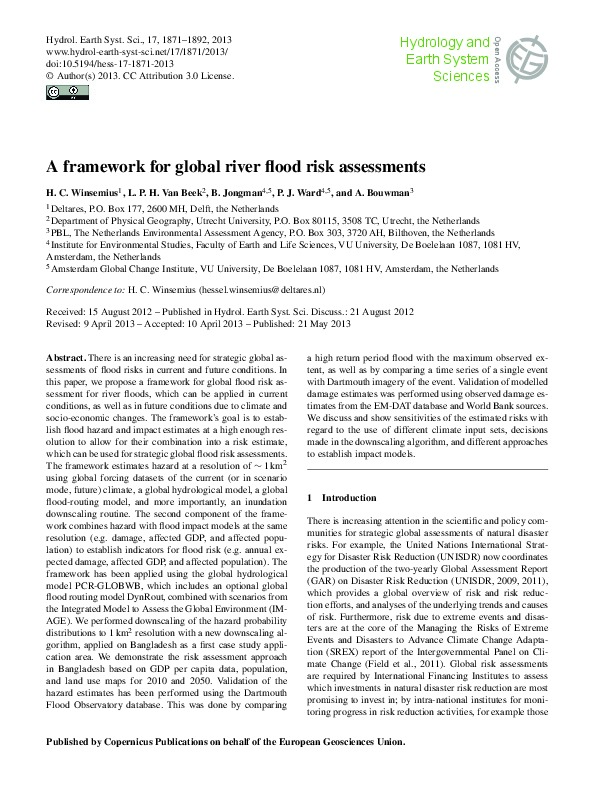 There is an increasing need for strategic global assessments of flood risks in current and future conditions. In this paper, we propose a framework for global flood risk assessment for river floods, which can be applied in current conditions, as well as in future conditions due to climate and socio-economic changes. The framework’s goal is to establish flood hazard and impact estimates at a high enough resolution to allow for their combination into a risk estimate, which can be used for strategic global flood risk assessments. The framework estimates hazard at a resolution of 1 km2 using global forcing datasets of the current (or in scenario mode, future) climate, a global hydrological model, a global flood-routing model, and more importantly, an inundation downscaling routine. The second component of the framework combines hazard with flood impact models at the same resolution (e.g. damage, affected GDP, and affected population) to establish indicators for flood risk (e.g. annual expected damage, affected GDP, and affected population). The framework has been applied using the global hydrological model PCR-GLOBWB, which includes an optional global flood routing model DynRout, combined with scenarios from the Integrated Model to Assess the Global Environment (IMAGE). We performed downscaling of the hazard probability distributions to 1 km2 resolution with a new downscaling algorithm, applied on Bangladesh as a first case study application area. We demonstrate the risk assessment approach in Bangladesh based on GDP per capita data, population, and land use maps for 2010 and 2050. Validation of the hazard estimates has been performed using the Dartmouth Flood Observatory database. This was done by comparing a high return period flood with the maximum observed extent, as well as by comparing a time series of a single event with Dartmouth imagery of the event. Validation of modelled damage estimates was performed using observed damage estimates from the EM-DAT database andWorld Bank sources. We discuss and show sensitivities of the estimated risks with regard to the use of different climate input sets, decisions made in the downscaling algorithm, and different approaches to establish impact models.