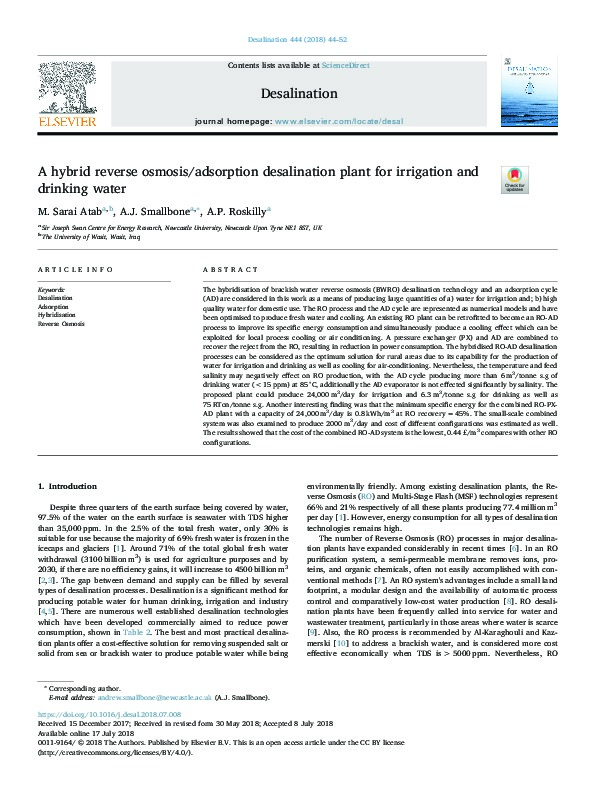 The hybridisation of brackish water reverse osmosis (BWRO) desalination technology and an adsorption cycle(AD) are considered in this work as a means of producing large quantities of a) water for irrigation and; b) high-quality water for domestic use. The RO process and the AD cycle are represented as numerical models and have been optimised to produce fresh water and cooling.

An existing RO plant can be retroﬁtted to become an RO-AD process to improve its speciﬁc energy consumption and simultaneously produce a cooling eﬀect which can be exploited for local process cooling or air conditioning. A pressure exchanger (PX) and AD are combined to recover the reject from the RO, resulting in a reduction in power consumption. The hybridised RO-AD desalination processes can be considered as the optimum solution for rural areas due to its capability for the production of water for irrigation and drinking as well as cooling for air-conditioning.

Nevertheless, the temperature and feed salinity may negatively eﬀect on RO production, with the AD cycle producing more than 6 m3/tonne s.g of drinking water (< 15 ppm) at 85 °C, additionally, the AD evaporator is not eﬀected signiﬁcantly by salinity. The proposed plant could produce 24,000 m3/day for irrigation and 6.3 m3/tonne s.g for drinking as well as75 RTon/tonne s.g. Another interesting ﬁnding was that the minimum speciﬁc energy for the combined RO-PX-AD plant with a capacity of 24,000 m3/day is 0.8 kWh/m3at RO recovery = 45%.

The small-scale combined system was also examined to produce 2000 m3/day and cost of diﬀerent conﬁgurations was estimated as well. The results showed that the cost of the combined RO-AD system is the lowest, 0.44 £/m3compares with other ROconﬁgurations

This is an open access article under the CC BY license