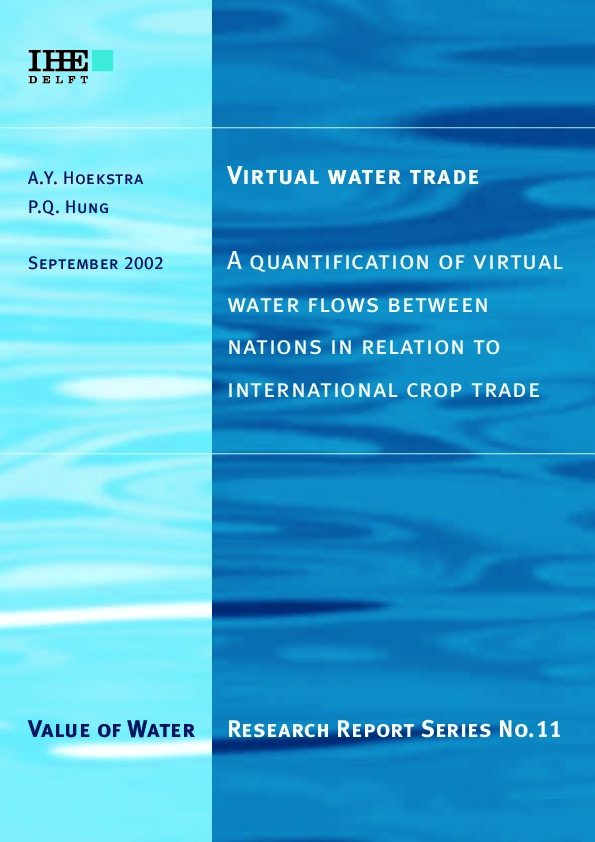 The water that is used in the production process of an agricultural or industrial product is called the 'virtual water' contained in the product. A water-scarce country might wish to import products that require a lot of water in their production (water-intensive products) and export products or services that require less water (waterextensive products). This implies net import of ‘virtual water’ (as opposed to import of real water, which is generally too expensive) and will relieve the pressure on the nation’s own water resources. Until date little is known on the actual volumes of virtual water trade flows between countries. The objective of this study is to quantify the volumes of all virtual water trade flows between nations in the period 1995-1999 and to put the virtual water trade balances of nations within the context of national water needs and water availability. The study has been limited to the quantification of virtual water trade flows related to international crop trade. The basic approach has been to multiply international crop trade flows (ton/yr) by their associated virtual water content (m3 /ton). The required crop trade data have been taken from the United Nations Statistics Division in New York. The required data on virtual water content of crops originating from different countries have been estimated on the basis of various FAO databases (CropWat, ClimWat, FAOSTAT). The calculations show that the global volume of crop-related virtual water trade between nations was 695 Gm3 /yr in average over the period 1995-1999. For comparison: the total water use by crops in the world has been estimated at 5400 Gm3 /yr (Rockström and Gordon, 2001). This means that 13% of the water used for crop production in the world is not used for domestic consumption but for export (in virtual form). This is the global percentage; the situation strongly varies between countries. Considering the period 1995-1999, the countries with largest net virtual water export are: United States, Canada, Thailand, Argentina, and India. The countries with largest net virtual water import in the same period are: Sri Lanka, Japan, the Netherlands, the Republic of Korea, and China. For each nation of the world a ‘water footprint’ has been calculated (a term chosen on the analogy of the ‘ecological footprint’). The water footprint, equal to the sum of the domestic water use and net virtual water import, is proposed here as a measure of a nation’s actual appropriation of the global water resources. It gives a more complete picture than if one looks at domestic water use only, as is being done until date. In addition to the water footprint, indicators are proposed for a nation’s ‘water self-sufficiency’ and a nation’s ‘water dependency’. In studying global virtual water trade flows, it is recommended to start working on other products than crops as well, for instance livestock products such as meat. Another next step is to start interpreting the data and to study how governments can deliberately interfere in the current national virtual water trade balances in order to achieve higher global water use efficiency.