A Review of Solar-geothermal Hybrid Systems for Water Desalination 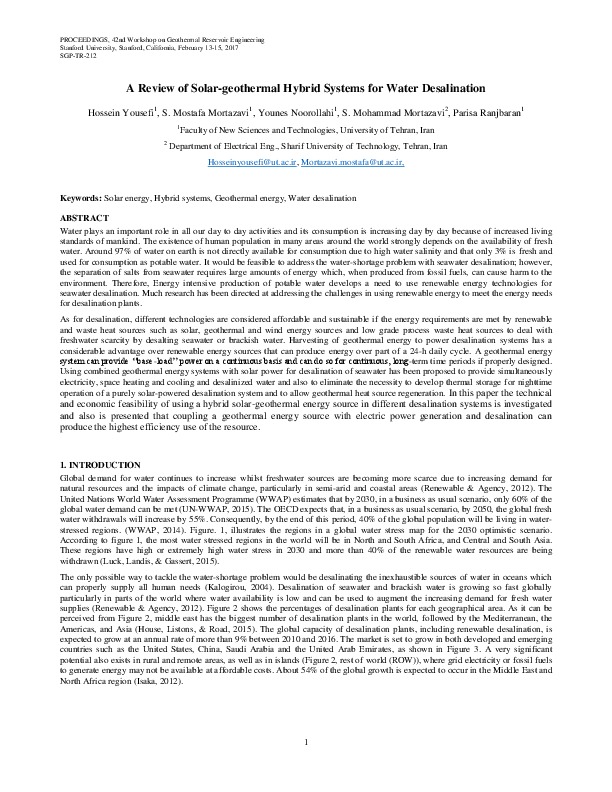 Water plays an important role in all our day to day activities and its consumption is increasing day by day because of increased living standards of mankind. The existence of human population in many areas around the world strongly depends on the availability of fresh water.

Around 97% of water on earth is not directly available for consumption due to high water salinity and that only 3% is fresh and used for consumption as potable water. It would be feasible to address the water-shortage problem with seawater desalination; however, the separation of salts from seawater requires large amounts of energy which, when produced from fossil fuels, can cause harm to the environment.

As for desalination, different technologies are considered affordable and sustainable if the energy requirements are met by renewable and waste heat sources such as solar, geothermal and wind energy sources and low grade process waste heat sources to deal with freshwater scarcity by desalting seawater or brackish water.

Harvesting of geothermal energy to power desalination systems has a considerable advantage over renewable energy sources that can produce energy over part of a 24-h daily cycle. A geothermal energy system can provide ‘‘base-load’’ power on a continuous basis and can do so for continuous, long-term time periods if properly designed.

Using combined geothermal energy systems with solar power for desalination of seawater has been proposed to provide simultaneously electricity, space heating and cooling and desalinized water and also to eliminate the necessity to develop thermal storage for nighttime operation of a purely solar-powered desalination system and to allow geothermal heat source regeneration.