A Review on Plant Without Soil - Hydroponics 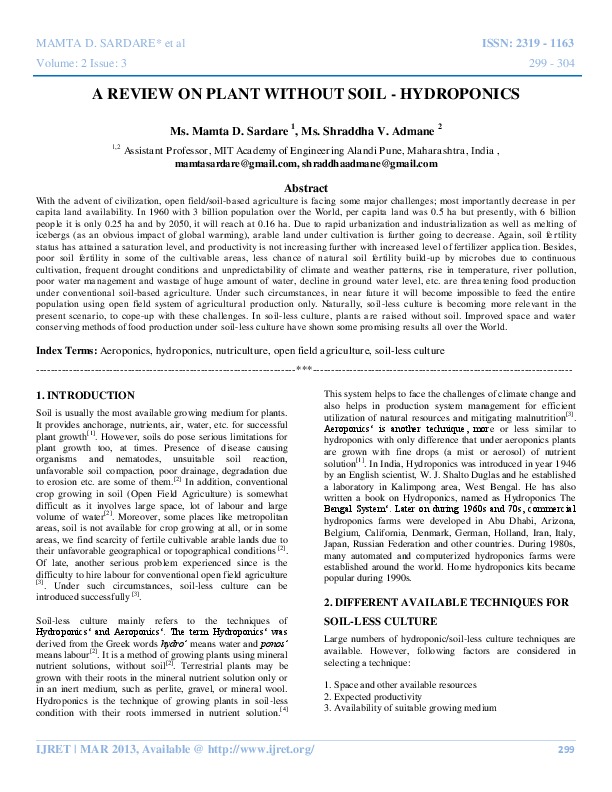 A Review on Plant Without Soil - Hydroponics

With the advent of civilization, open field/soil-based agriculture is facing some major challenges; most importantly decrease in per capita land availability. In 1960 with 3 billion population over the World, per capita land was 0.5 ha but presently, with 6 billion people it is only 0.25 ha and by 2050, it will reach at 0.16 ha. Due to rapid urbanization and industrialization as well as melting of icebergs (as an obvious impact of global warming), arable land under cultivation is further going to decrease. Again, soil fertility status has attained a saturation level, and productivity is not increasing further with increased level of fertilizer application. Besides, poor soil fertility in some of the cultivable areas, less chance of natural soil fertility build-up by microbes due to continuous cultivation, frequent drought conditions and unpredictability of climate and weather patterns, rise in temperature, river pollution, poor water management and wastage of huge amount of water, decline in ground water level, etc. are threatening food production under conventional soil-based agriculture. Under such circumstances, in near future it will become impossible to feed the entire population using open field system of agricultural production only. Naturally, soil-less culture is becoming more relevant in the present scenario, to cope-up with these challenges. In soil-less culture, plants are raised without soil. Improved space and water conserving methods of food production under soil-less culture have shown some promising results all over the World.