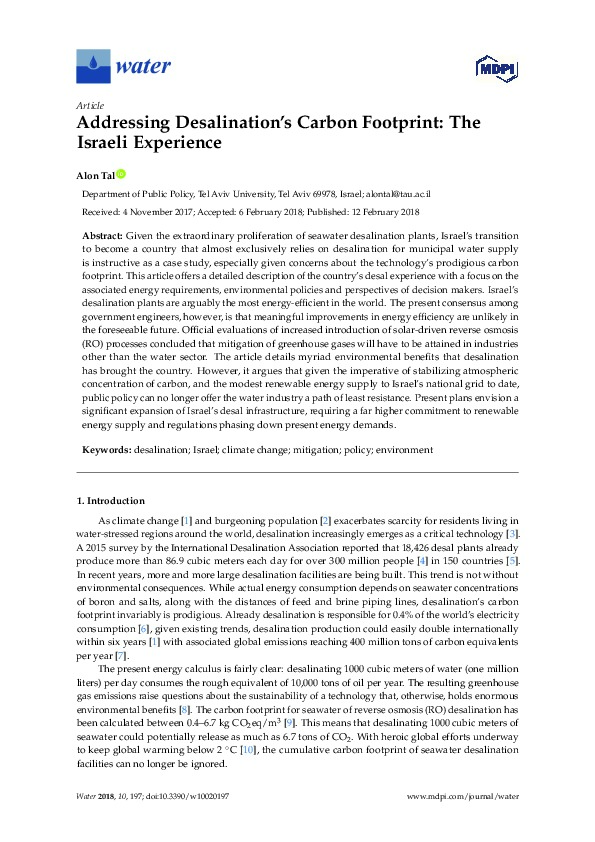 Given the extraordinary proliferation of seawater desalination plants, Israel’s transition to become a country that almost exclusively relies on desalination for municipal water supply is instructive as a case study, especially given concerns about the technology’s prodigious carbon footprint.

This article offers a detailed description of the country’s desal experience with a focus on the associated energy requirements, environmental policies and perspectives of decision makers. Israel’s desalination plants are arguably the most energy-efficient in the world. The present consensus among government engineers, however, is that meaningful improvements in energy efficiency are unlikely in the foreseeable future.

Official evaluations of increased introduction of solar-driven reverse osmosis (RO) processes concluded that mitigation of greenhouse gases will have to be attained in industries other than the water sector. The article details myriad environmental benefits that desalination has brought the country.

However, it argues that given the imperative of stabilizing atmospheric concentration of carbon, and the modest renewable energy supply to Israel’s national grid to date, public policy can no longer offer the water industry a path of least resistance. Present plans envision a significant expansion of Israel’s desal infrastructure, requiring a far higher commitment to renewable energy supply and regulations phasing down present energy demands.