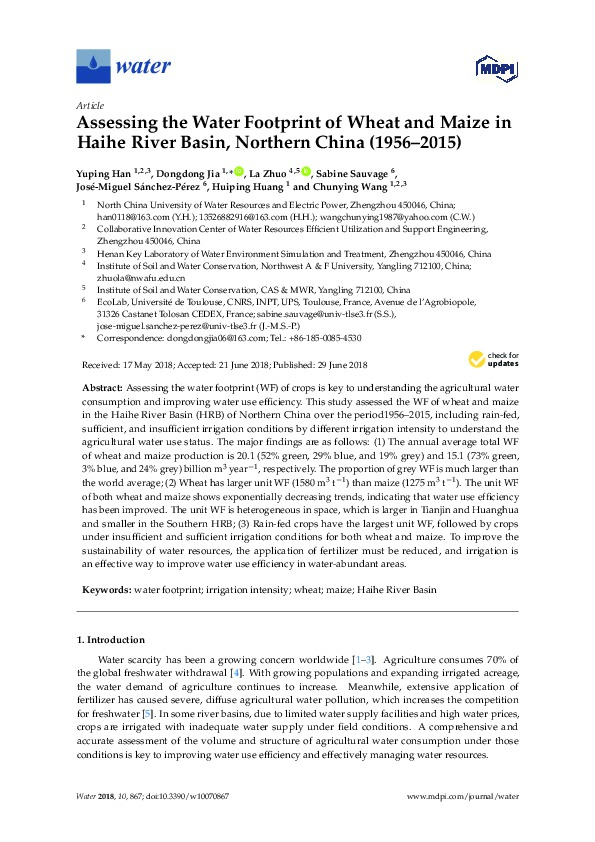 Assessing the water footprint (WF) of crops is key to understanding the agricultural water consumption and improving water use efficiency. This study assessed the WF of wheat and maize in the Haihe River Basin (HRB) of Northern China over the period1956–2015, including rain-fed, sufficient, and insufficient irrigation conditions by different irrigation intensity to understand the agricultural water use status.

The major findings are as follows: (1) The annual average total WF of wheat and maize production is 20.1 (52% green, 29% blue, and 19% grey) and 15.1 (73% green, 3% blue, and 24% grey) billion m3 year−1, respectively. The proportion of grey WF is much larger than the world average; (2) Wheat has larger unit WF (1580 m3 t−1) than maize (1275 m3 t−1). The unit WF of both wheat and maize shows exponentially decreasing trends, indicating that water use efficiency has been improved. The unit WF is heterogeneous in space, which is larger in Tianjin and Huanghua and smaller in the Southern HRB; (3) Rain-fed crops have the largest unit WF, followed by crops under insufficient and sufficient irrigation conditions for both wheat and maize.

To improve the sustainability of water resources, the application of fertilizer must be reduced, and irrigation is an effective way to improve water use efficiency in water-abundant areas.