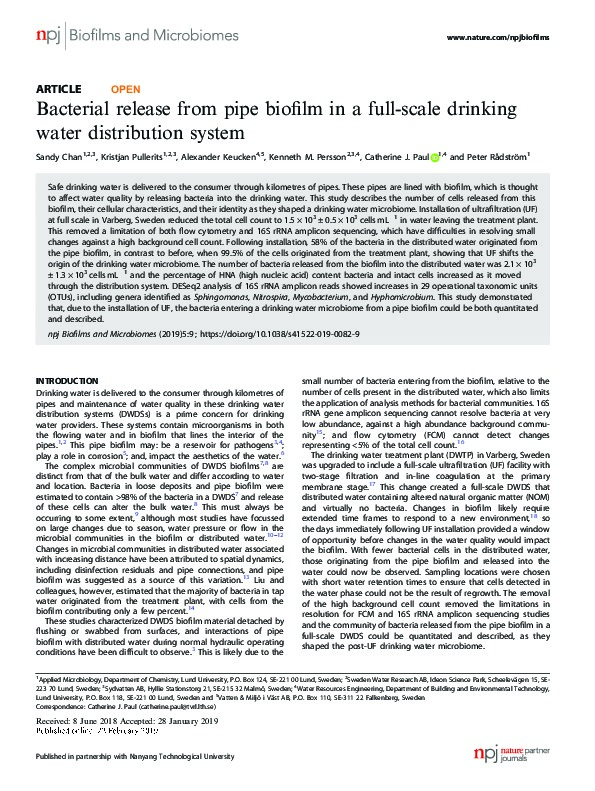 Safe drinking water is delivered to the consumer through kilometres of pipes. These pipes are lined with biofilm, which is thought to affect water quality by releasing bacteria into the drinking water. This study describes the number of cells released from this biofilm, their cellular characteristics, and their identity as they shaped a drinking water microbiome. Installation of ultrafiltration (UF) at full scale in Varberg, Sweden reduced the total cell count to 1.5 × 103 ± 0.5 × 103 cells mL−1 in water leaving the treatment plant.

This removed a limitation of both flow cytometry and 16S rRNA amplicon sequencing, which have difficulties in resolving small changes against a high background cell count. Following installation, 58% of the bacteria in the distributed water originated from the pipe biofilm, in contrast to before, when 99.5% of the cells originated from the treatment plant, showing that UF shifts the origin of the drinking water microbiome.

The number of bacteria released from the biofilm into the distributed water was 2.1 × 103 ± 1.3 × 103 cells mL−1 and the percentage of HNA (high nucleic acid) content bacteria and intact cells increased as it moved through the distribution system. DESeq2 analysis of 16S rRNA amplicon reads showed increases in 29 operational taxonomic units (OTUs), including genera identified as Sphingomonas, Nitrospira, Mycobacterium, and Hyphomicrobium. This study demonstrated that, due to the installation of UF, the bacteria entering a drinking water microbiome from a pipe biofilm could be both quantitated and described.