Brine Discharge From Desalination Plants: A Modeling Approach to an Optimized Outfall Design 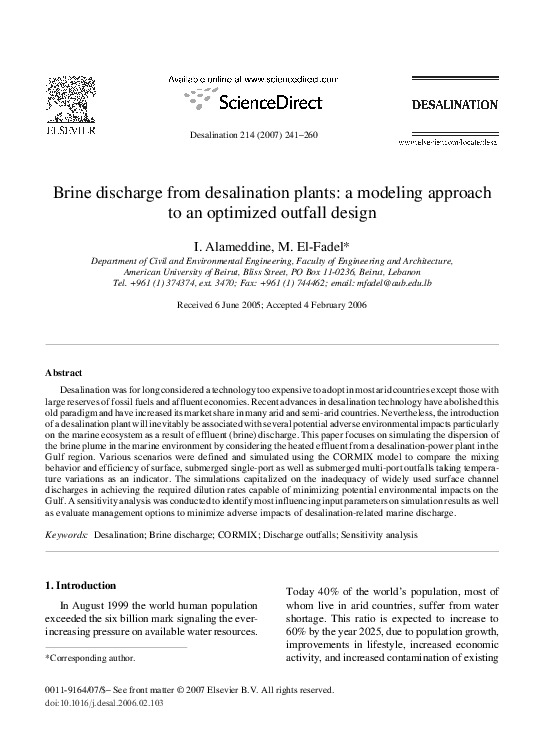 By I. Alameddine, M. El-Fadel

Desalination was for long considered a technology too expensive to adopt in most arid countries except those with large reserves of fossil fuels and affluent economies.

Recent advances in desalination technology have abolished this old paradigm and have increased its market share in many arid and semi-arid countries. Nevertheless, the introduction of a desalination plant will inevitably be associated with several potential adverse environmental impacts particularly on the marine ecosystem as a result of effluent (brine) discharge.

This paper focuses on simulating the dispersion of the brine plume in the marine environment by considering the heated effluent from a desalination-power plant in the Gulf region. Various scenarios were defined and simulated using the CORMIX model to compare the mixing behavior and efficiency of surface, submerged single-port as well as submerged multi-port outfalls taking temperature variations as an indicator.

The simulations capitalized on the inadequacy of widely used surface channel discharges in achieving the required dilution rates capable of minimizing potential environmental impacts on the Gulf. A sensitivity analysis was conducted to identify most influencing input parameters on simulation results as well as evaluate management options to minimize adverse impacts of desalination-related marine discharge.