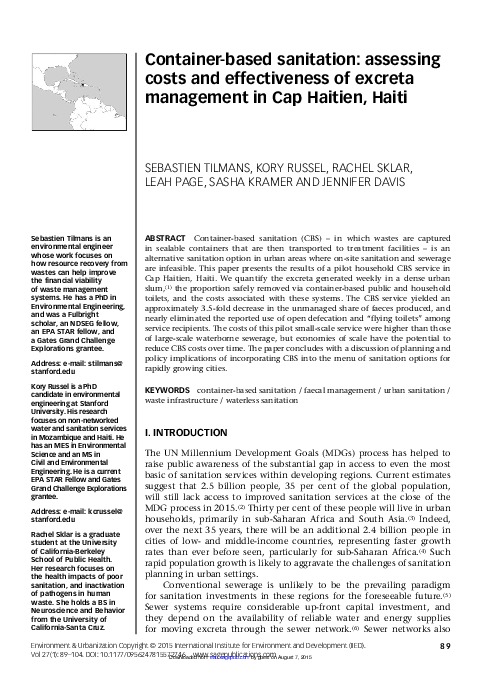 Container-based sanitation (CBS) – in which wastes are captured in sealable containers that are then transported to treatment facilities – is an alternative sanitation option in urban areas where on-site sanitation and sewerage are infeasible.

This paper presents the results of a pilot household CBS service in Cap Haitien, Haiti. We quantify the excreta generated weekly in a dense urban slum,(1) the proportion safely removed via container-based public and household toilets, and the costs associated with these systems. The CBS service yielded an approximately 3.5-fold decrease in the unmanaged share of faeces produced, and nearly eliminated the reported use of open defecation and “flying toilets” among service recipients.

The costs of this pilot small-scale service were higher than those of large-scale waterborne sewerage, but economies of scale have the potential to reduce CBS costs over time. The paper concludes with a discussion of planning and policy implications of incorporating CBS into the menu of sanitation options for rapidly growing cities.