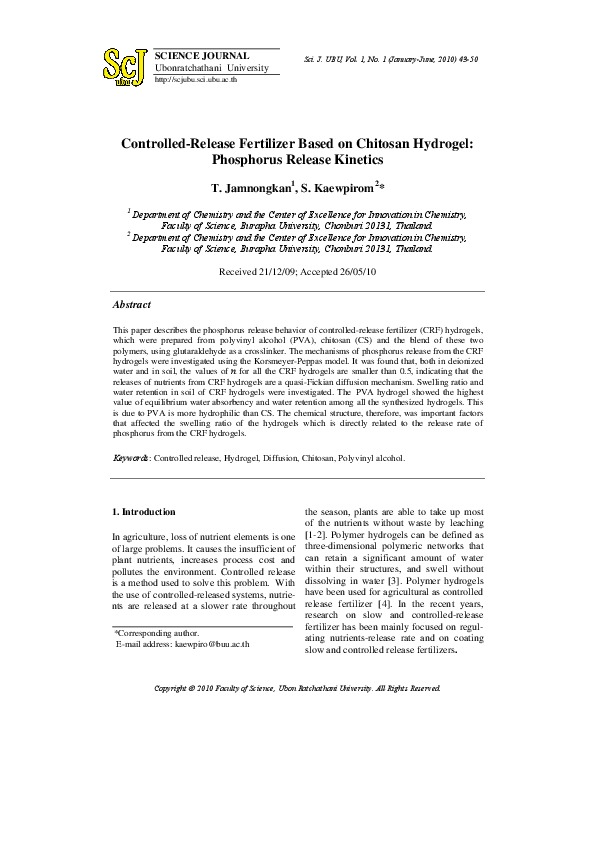 his paper describes the phosphorus release behavior of controlled-release fertilizer (CRF) hydrogels, which were prepared from polyvinyl alcohol (PVA), chitosan (CS) and the blend of these two polymers, using glutaraldehyde as a crosslinker. The mechanisms of phosphorus release from the CRF hydrogels were investigated using the Korsmeyer-Peppas model. It was found that, both in deionized water and in soil, the values of n for all the CRF hydrogels are smaller than 0.5, indicating that the releases of nutrients from CRF hydrogels are a quasi-Fickian diffusion mechanism. Swelling ratio and water retention in soil of CRF hydrogels were investigated. The PVA hydrogel showed the highest value of equilibrium water absorbency and water retention among all the synthesized hydrogels. This is due to PVA is more hydrophilic than CS. The chemical structure, therefore, was important factors that affected the swelling ratio of the hydrogels which is directly related to the release rate of phosphorus from the CRF hydrogels.