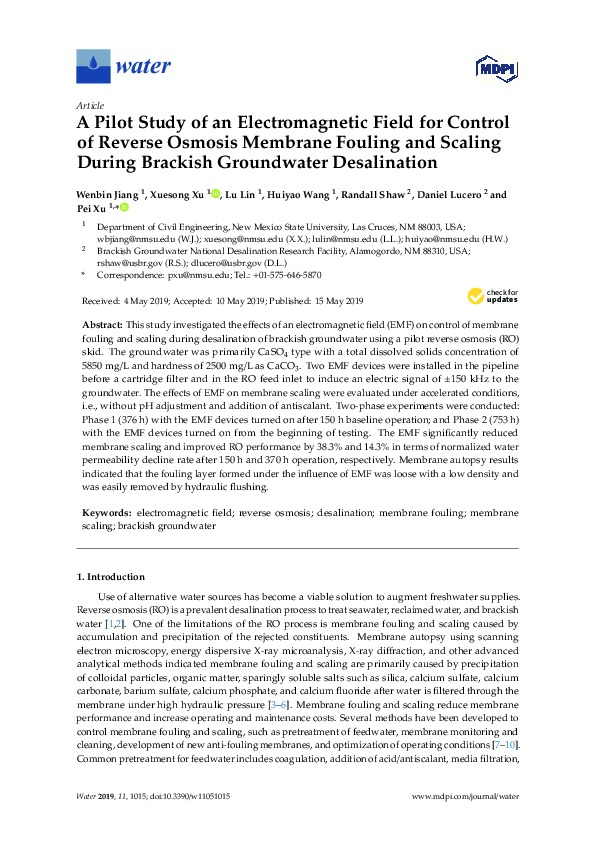 This study investigated the effects of an electromagnetic field (EMF) on control of membrane fouling and scaling during desalination of brackish groundwater using a pilot reverse osmosis (RO) skid. The groundwater was primarily CaSO4 type with a total dissolved solids concentration of 5850 mg/L and hardness of 2500 mg/L as CaCO3. Two EMF devices were installed in the pipeline before a cartridge filter and in the RO feed inlet to induce an electric signal of ±150 kHz to the groundwater.

The effects of EMF on membrane scaling were evaluated under accelerated conditions, i.e., without pH adjustment and addition of antiscalant. Two-phase experiments were conducted: Phase 1 (376 h) with the EMF devices turned on after 150 h baseline operation; and Phase 2 (753 h) with the EMF devices turned on from the beginning of testing. The EMF significantly reduced membrane scaling and improved RO performance by 38.3% and 14.3% in terms of normalized water permeability decline rate after 150 h and 370 h operation, respectively. Membrane autopsy results indicated that the fouling layer formed under the influence of EMF was loose with a low density and was easily removed by hydraulic flushing.