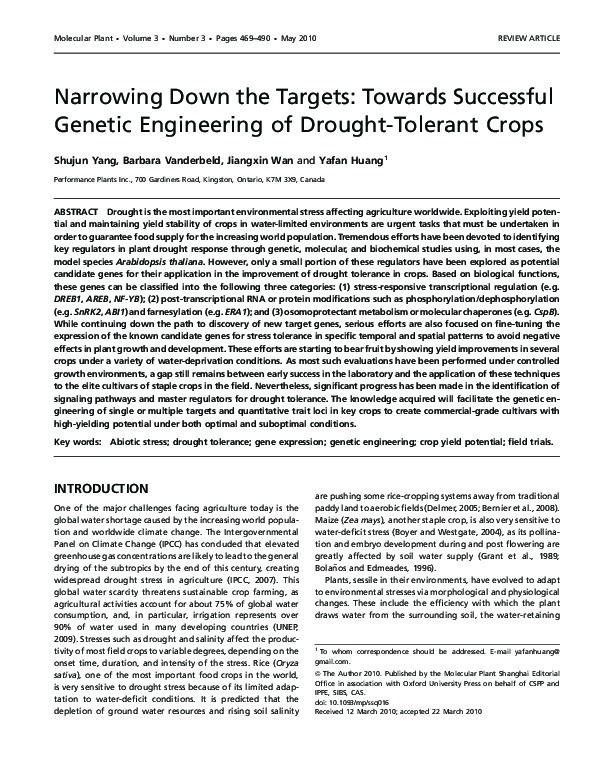 Narrowing Down the Targets: Towards Successful Genetic Engineering of Drought-Tolerant Crops

Drought is the most important environmental stress affecting agriculture worldwide. Exploiting yield potential and maintaining yield stability of crops in water-limited environments are urgent tasks that must be undertaken in order to guarantee food supply for the increasing world population. Tremendous efforts have been devoted to identifying key regulators in plant drought response through genetic, molecular, and biochemical studies using, in most cases, the model species  Arabidopsis thaliana . However, only a small portion of these regulators have been explored as potential candidate genes for their application in the improvement of drought tolerance in crops. Based on biological functions, these genes can be classified into the following three categories:

While continuing down the path to discovery of new target genes, serious efforts are also focused on fine-tuning the expression of the known candidate genes for stress tolerance in specific temporal and spatial patterns to avoid negative effects in plant growth and development. These efforts are starting to bear fruit by showing yield improvements in several crops under a variety of water-deprivation conditions. As most such evaluations have been performed under controlled growth environments, a gap still remains between early success in the laboratory and the application of these techniques to the elite cultivars of staple crops in the field. Nevertheless, significant progress has been made in the identification of signaling pathways and master regulators for drought tolerance. The knowledge acquired will facilitate the genetic engineering of single or multiple targets and quantitative trait loci in key crops to create commercial-grade cultivars with high-yielding potential under both optimal and suboptimal conditions.