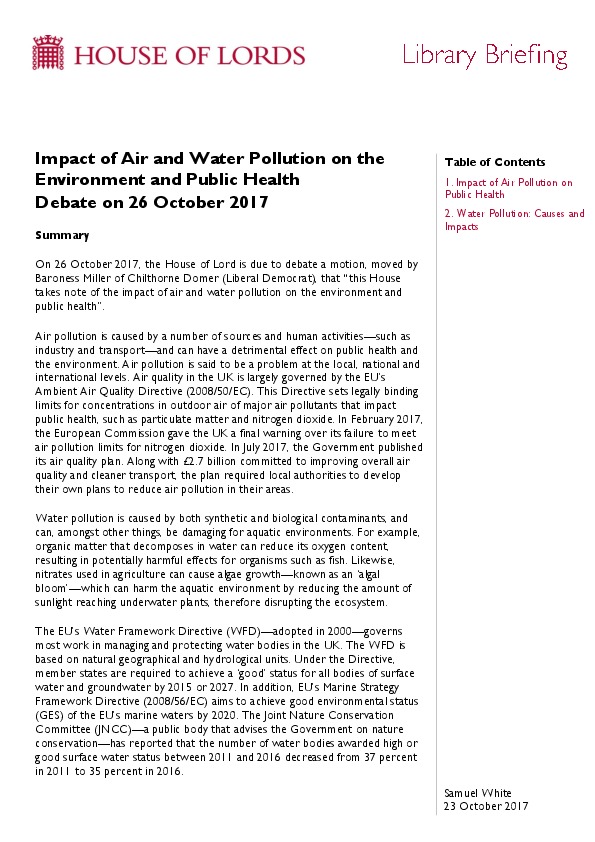 Air pollution is caused by a number of sources and human activities—such as industry and transport—and can have a detrimental effect on public health and the environment. Air pollution is said to be a problem at the local, national and international levels. Air quality in the UK is largely governed by the EU’s Ambient Air Quality Directive (2008/50/EC). This Directive sets legally binding limits for concentrations in outdoor air of major air pollutants that impact public health, such as particulate matter and nitrogen dioxide. In February 2017, the European Commission gave the UK a final warning over its failure to meet air pollution limits for nitrogen dioxide. In July 2017, the Government published its air quality plan. Along with £2.7 billion committed to improving overall air quality and cleaner transport, the plan required local authorities to develop their own plans to reduce air pollution in their areas.

Water pollution is caused by both synthetic and biological contaminants, and can, amongst other things, be damaging for aquatic environments. For example, organic matter that decomposes in water can reduce its oxygen content, resulting in potentially harmful effects for organisms such as fish. Likewise, nitrates used in agriculture can cause algae growth—known as an ‘algal bloom’—which can harm the aquatic environment by reducing the amount of sunlight reaching underwater plants, therefore disrupting the ecosystem.

The EU’s Water Framework Directive (WFD)—adopted in 2000—governs most work in managing and protecting water bodies in the UK. The WFD is based on natural geographical and hydrological units. Under the Directive, member states are required to achieve a ‘good’ status for all bodies of surface water and groundwater by 2015 or 2027. In addition, EU’s Marine Strategy Framework Directive (2008/56/EC) aims to achieve good environmental status (GES) of the EU’s marine waters by 2020. The Joint Nature Conservation Committee (JNCC)—a public body that advises the Government on nature conservation—has reported that the number of water bodies awarded high or good surface water status between 2011 and 2016 decreased from 37 percent in 2011 to 35 percent in 2016.