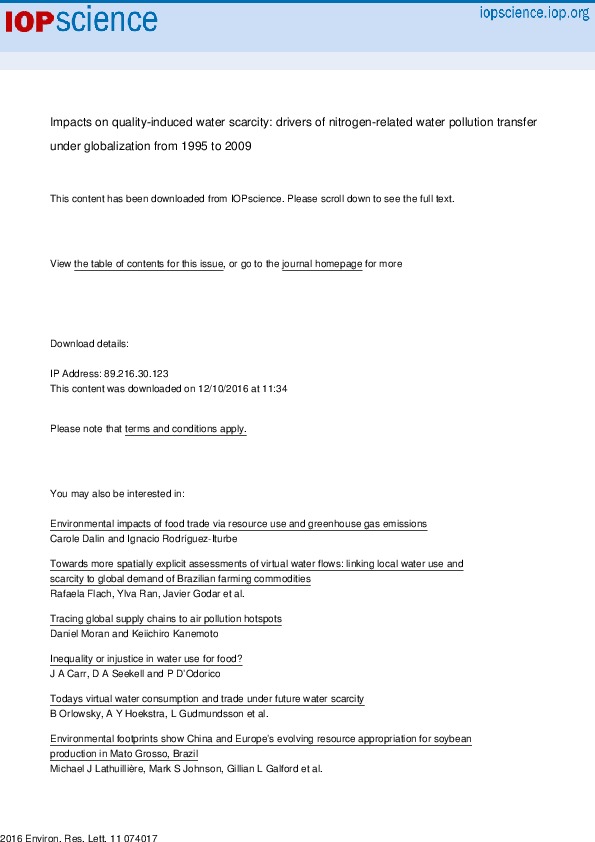 Impacts on quality-induced water scarcity: drivers of nitrogen-related water pollution transfer under globalization from 1995 to 2009

Globalization enables the transfer of impacts on water availability. We argue that the threat should be evaluated not only by decrease of quantity, but more importantly by the degradation of water quality in exporting countries. Grouping the world into fourteen regions, this paper establishes a multi-region input-output framework to calculate the nitrogen-related grey water footprint and a water quality induced scarcity index caused by pollution, for the period of 1995 to 2009.

It is discovered that grey water embodied in international trade has been growing faster than total grey water footprint. China, the USA and India were the three top grey water exporters which accounted for more than half the total traded grey water. Dilemma rose when China and India were facing highest grey water scarcity. The EU and the USA were biggest grey water importers that alleviated their water stress by outsourcing water pollution.

A structural decomposition analysis is conducted to study the drivers to the evolution of virtual flows of grey water under globalization during the period of 1995 to 2009. The results show that despite the technical progress that offset the growth of traded grey water, structural effects under globalization including both evolution in the globalized economic system and consumption structure, together with consumption volume made a positive contribution.

It is found that the structural effect intensified the pollution-induced water scarcity of exporters as it generally increased all nations’ imported grey water while resulting in increases in only a few nations’ exported grey water, such as Brazil, China and Indonesia. At last, drawing from the ‘cap-and-trade’ and ‘boarder-tax-adjustment’ schemes, we propose policy recommendations that ensure water security and achieve environmentally sustainable trade from both the sides of production and consumption.