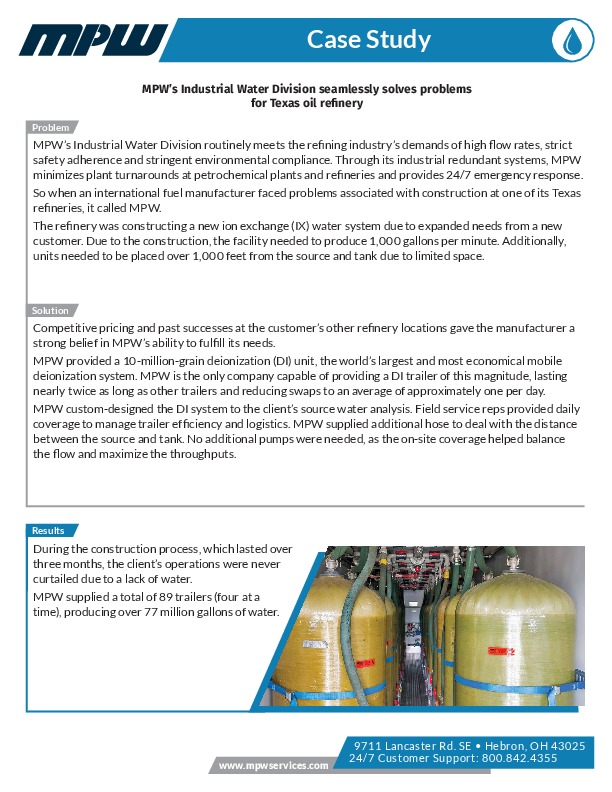 So when an international fuel manufacturer faced problems associated with construction at one of its Texas refineries, it called MPW.

The refinery was constructing a new ion exchange (IX) water system due to expanded needs from a new customer. Due to the construction, the facility needed to produce 1,000 gallons per minute. Additionally, units needed to be placed over 1,000 feet from the source and tank due to limited space.

Competitive pricing and past successes at the customer’s other refinery locations gave the manufacturer a strong belief in MPW’s ability to fulfill its needs. MPW provided 10-million-grain deionization (DI) unit, the world’s largest and most economical mobile deionization system.

MPW is capable of providing a DI trailer of this magnitude, lasting nearly twice as long as other trailers and reducing swaps to an average of approximately one per day.

MPW custom-designed the DI system to the client’s source water analysis. Field service reps provided daily coverage to manage trailer efficiency and logistics. MPW supplied additional hose to deal with the distance between the source and tank. No additional pumps were needed, as the on-site coverage helped balance the flow and maximize the throughputs.

Check the results in the document attached above.