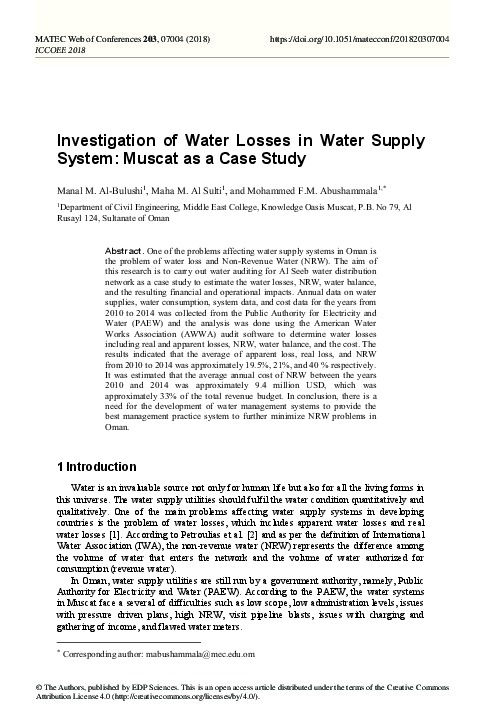 One of the problems affecting water supply systems in Oman is the problem of water loss and Non-Revenue Water (NRW). The aim of this research is to carry out water auditing for Al Seeb water distribution network as a case study to estimate the water losses, NRW, water balance, and the resulting financial and operational impacts. Annual data on water supplies, water consumption, system data, and cost data for the years from 2010 to 2014 was collected from the Public Authority for Electricity and Water (PAEW) and the analysis was done using the American Water Works Association (AWWA) audit software to determine water losses including real and apparent losses, NRW, water balance, and the cost. The results indicated that the average of apparent loss, real loss, and NRW from 2010 to 2014 was approximately 19.5%, 21%, and 40 % respectively. It was estimated that the average annual cost of NRW between the years 2010 and 2014 was approximately 9.4 million USD, which was approximately 33% of the total revenue budget. In conclusion, there is a need for the development of water management systems to provide the best management practice system to further minimize NRW problems in Oman.