Microalgae-Enabled Wastewater Treatment: A Sustainable Strategy for Bioremediation of Pesticides 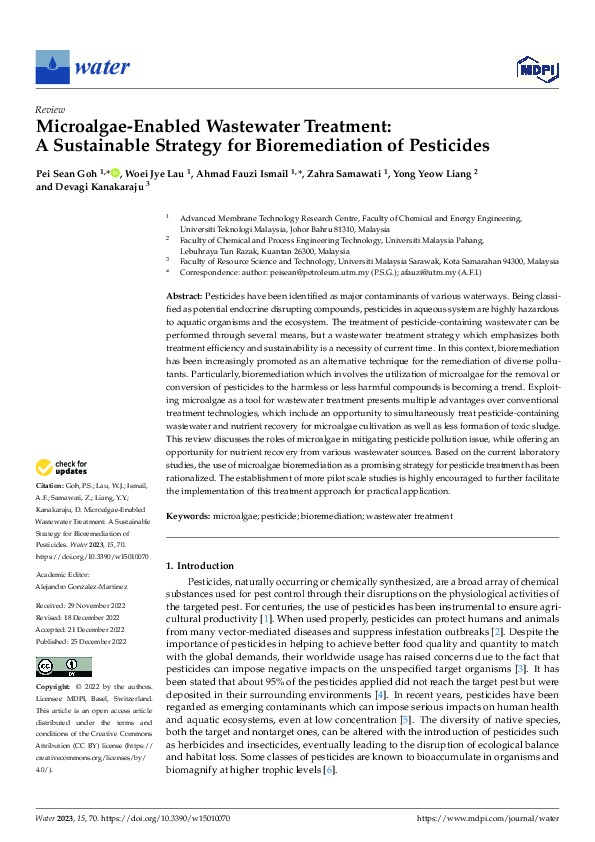 Microalgae-Enabled Wastewater Treatment: A Sustainable Strategy for Bioremediation of Pesticides

Pesticides have been identified as major contaminants of various waterways. Being classified as potential endocrine disrupting compounds, pesticides in aqueous system are highly hazardous to aquatic organisms and the ecosystem. The treatment of pesticide-containing wastewater can be performed through several means, but a wastewater treatment strategy which emphasizes both treatment efficiency and sustainability is a necessity of current time. In this context, bioremediation has been increasingly promoted as an alternative technique for the remediation of diverse pollutants. Particularly, bioremediation which involves the utilization of microalgae for the removal or conversion of pesticides to the harmless or less harmful compounds is becoming a trend. Exploiting microalgae as a tool for wastewater treatment presents multiple advantages over conventional treatment technologies, which include an opportunity to simultaneously treat pesticide-containing wastewater and nutrient recovery for microalgae cultivation as well as less formation of toxic sludge. This review discusses the roles of microalgae in mitigating pesticide pollution issue, while offering an opportunity for nutrient recovery from various wastewater sources. Based on the current laboratory studies, the use of microalgae bioremediation as a promising strategy for pesticide treatment has been rationalized. The establishment of more pilot scale studies is highly encouraged to further facilitate the implementation of this treatment approach for practical application.

Pesticides, naturally occurring or chemically synthesized, are a broad array of chemical substances used for pest control through their disruptions on the physiological activities of the targeted pest. For centuries, the use of pesticides has been instrumental to ensure agricultural productivity [1]. When used properly, pesticides can protect humans and animals from many vector-mediated diseases and suppress infestation outbreaks [2]. Despite the importance of pesticides in helping to achieve better food quality and quantity to match with the global demands, their worldwide usage has raised concerns due to the fact that pesticides can impose negative impacts on the unspecified target organisms [3]. It has been stated that about 95% of the pesticides applied did not reach the target pest but were deposited in their surrounding environments [4]. In recent years, pesticides have been regarded as emerging contaminants which can impose serious impacts on human health and aquatic ecosystems, even at low concentration [5]. The diversity of native species, both the target and nontarget ones, can be altered with the introduction of pesticides such as herbicides and insecticides, eventually leading to the disruption of ecological balance and habitat loss. Some classes of pesticides are known to bioaccumulate in organisms and biomagnify at higher trophic levels [6].

Although some countries have banned the residential uses of poisonous pesticides, the agricultural applications of pesticide are still widely permitted [7,8]. While some pesticides can be considered harmless to the users and the current risk assessment also shows insufficient evidence on the lethal and acute effects of pesticides, chronic effects such as birth defects, tumor productions and neurotoxicity have been associated with the long-term exposure to the active ingredients of certain types of pesticides and their metabolites [9,10]. Pesticides can be degraded in the natural environment through the metabolic activities of microorganisms or through chemical decomposition [11]. Nevertheless, many recalcitrant pesticides are stable over time and remain readily detectable in the environment, implying that degradation by soil bacteria lacks efficiency [12]. The high stability and water solubility of the residues of some pesticides make them persistent in the water ecosystem. The degradable products of pesticide, i.e., the metabolites, can also result in water contamination [13]. Lately, drinking water has been identified as a possible route for human exposure to pesticides. The pesticides in drinking water supplies, even at low-level contamination, are perceived as a potential source of health problems due to their functions as endocrine disruptors [14]. The presence of pesticide residues in these water systems has become a continuous concern as it presents a potential threat to public health and water security.

Various strategies have been implemented to alleviate the detrimental impacts of pesticide contamination in aquatic system. Devising potent detection and establishing treatment methods for pesticide contaminated water have been actively pursued. Pesticide remediation can be accomplished through physical, chemical and biological approaches [15]. These processes depend largely on multiple factors such as the type of matrix, nature of pesticide, water chemistry and cost of investment, among others. Therefore, the selection of pesticide treatment technology should take the advantages and limitations of each of them into account. With current emphases on sustainable wastewater treatment, bioremediation which involves the elimination of contaminants through the catabolic ability of microorganisms becomes an important topic. The growth of specific microorganisms is stimulated by utilizing the pesticide contaminants as sources of food and energy. Through bioremediation, contaminants can be converted into less complex structures and harmless gases such as carbon dioxide and water as by-products. Bioremediation by microalgae, also known as phytoremediation, is now a highly preferred process for wastewater treatment [16].

Microalgae are fast growing aquatic organisms that exist naturally in various habitats and throughout the entire oceanic ecosystem, including in freshwater and saline water ecosystems. Microalgae are at the basal level of food pyramid and act as the initial point of trophic transfer; hence, they are crucial in maintaining the equilibrium of aquatic ecosystem. The role of microalgae in recovering important nutrients such as phosphorus and nitrogen from secondary effluents has been increasingly investigated in the past few years. This approach not only reduces the occurrence of eutrophication and long-term pollution problems caused on some persistent organic micropollutants [17,18,19], but microalgae cultivation in wastewater also offers tertiary treatment coupled with the production of commercially attractive biomass which can serve many purposes in industries [20]. In addition, the biomass produced from microalgae cultivation can be used as feedstocks of a diverse range of products that hold numerous applications in the industries and for bioenergy generation at commercial scale. Microalgae have been used to treat micropollutants such as pesticides, dyes, heavy metals and drugs originated from various industrial sectors, including domestic effluents, agricultural runoffs and pharmaceuticals [21,22,23,24,25,26,27]. Microalgae have demonstrated the ability to degrade and detoxify a wide spectrum of organic and inorganic pollutant through bioadsorption, bioaccumulation or biodegradation [28,29]. These pathways provide attractive means to remediate pesticides found in various point of entries. The metabolic mechanisms responsible for pesticide removal by microorganisms have been summarized by Nie et al. [30].

The feasibility of microalgae-enabled bioremediation for a wide range of emerging contaminants including pesticides has been comprehensively reviewed and discussed [31,32,33,34,35]. It has been generally observed that the overall treatment efficiency can be boosted by harnessing the unique capability of microalgae to simultaneously achieve pollutant removal and nutrient recovery. Tremendous efforts have also been made in the studies related to the bioremediation of pesticides. Much research has been focused on studying the efficiency of newly isolated strains in remediating pesticides via different mechanisms. Sheng et al. provided insights into the bioremediation of pesticides using bacteria, fungi and microalgae, in which the mechanisms involved in the contemporary biodegradation approaches, especially those based on bacteria-microalgae consortium, were highlighted [36]. The bibliometric analyses performed by Verasoundarapandian et al. evidenced a significant increase in the research trend on bioremediation of pesticides based on microalgae in the past 5 years [37]. Hena et al. reviewed the potential and effectiveness of microalgae in removal pharmaceuticals and personal care products. The microalgae species and their ability to acclimatize are important factors affecting the pollutant removal efficiencies [38]. The metabolism and pathways of microalgae used for the remediation of emerging pollutants in wastewater have been reported by Maia et al. [39]. With more pesticide compounds being identified as potential candidates to become priority pollutants in near future, there is a need to substantially improve the current wastewater system and to look at the potential alternatives. Although extensive investigations have been made in pesticide remediation using microalgae, these studies have not been systematically reviewed. The present review aims to provide an overview and analyses on the potentials of microalgae-enabled wastewater treatment for pesticide bioremediation. By comparing the features of currently available pesticide treatment technologies, the advantages of microalgae are highlighted. Based on the specific removal mechanisms, the roles and efficiencies of microalgae in removing pesticides from wastewater are evaluated. As assimilation of nutrients by microalgae during the treatment process is an attractive feature for microalgae-enabled wastewater treatment, this review also pays attention to the capability of the treatment process to simultaneously realize pesticide removal and nutrient recovery. The major stumbling blocks in materializing microalgae bioremediation and the current knowledge gaps are identified. The corresponding future directions are highlighted to facilitate the implementation of this interesting approach for practical applications.