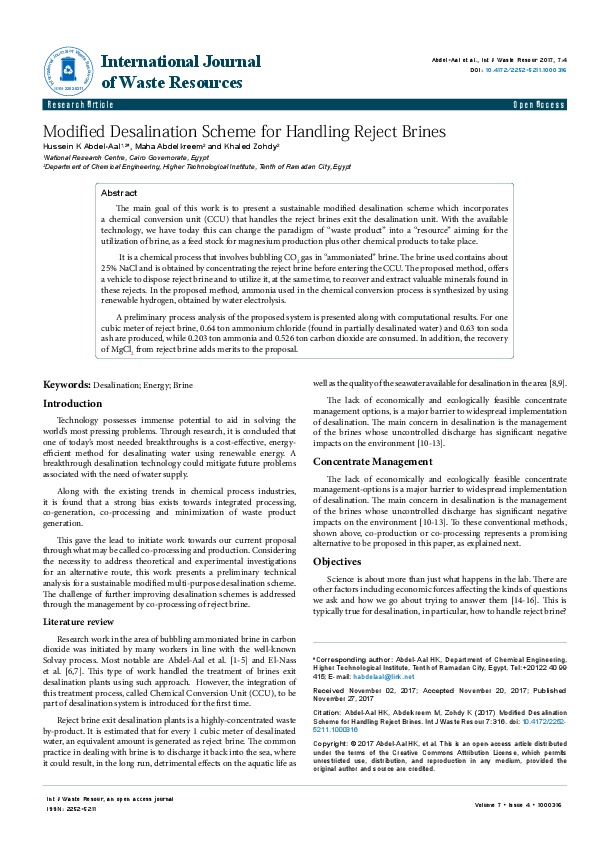 The main goal of this work is to present a sustainable modified desalination scheme which incorporates a chemical conversion unit (CCU) that handles the reject brines exit the desalination unit. With the available technology, we have today this can change the paradigm of “waste product” into a “resource” aiming for the utilization of brine, as a feed stock for magnesium production plus other chemical products to take place.

It is a chemical process that involves bubbling CO2 gas in “ammoniated” brine. The brine used contains about 25% NaCl and is obtained by concentrating the reject brine before entering the CCU. The proposed method, offers a vehicle to dispose reject brine and to utilize it, at the same time, to recover and extract valuable minerals found in these rejects. In the proposed method, ammonia used in the chemical conversion process is synthesized by using renewable hydrogen, obtained by water electrolysis.

A preliminary process analysis of the proposed system is presented along with computational results. For one cubic meter of reject brine, 0.64 ton ammonium chloride (found in partially desalinated water) and 0.63 ton soda ash are produced, while 0.203 ton ammonia and 0.526 ton carbon dioxide are consumed. In addition, the recovery of MgCl2 from reject brine adds merits to the proposal.