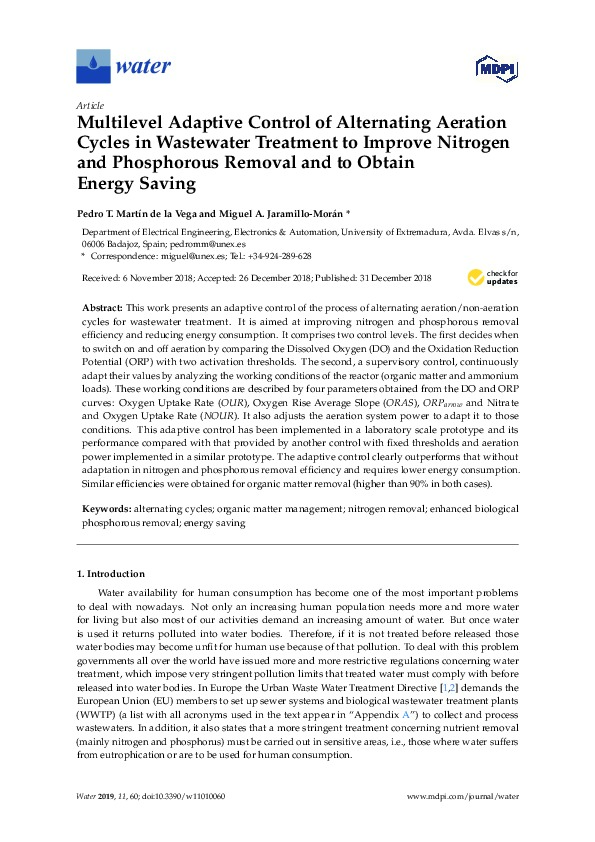 This work presents an adaptive control of the process of alternating aeration/non-aeration cycles for wastewater treatment. It is aimed at improving nitrogen and phosphorous removal efficiency and reducing energy consumption. It comprises two control levels. The first decides when to switch on and off aeration by comparing the Dissolved Oxygen (DO) and the Oxidation Reduction Potential (ORP) with two activation thresholds. The second, a supervisory control, continuously adapt their values by analyzing the working conditions of the reactor (organic matter and ammonium loads). These working conditions are described by four parameters obtained from the DO and ORP curves: Oxygen Uptake Rate (OUR), Oxygen Rise Average Slope (ORAS), ORParrow and Nitrate and Oxygen Uptake Rate (NOUR). It also adjusts the aeration system power to adapt it to those conditions. This adaptive control has been implemented in a laboratory scale prototype and its performance compared with that provided by another control with fixed thresholds and aeration power implemented in a similar prototype. The adaptive control clearly outperforms that without adaptation in nitrogen and phosphorous removal efficiency and requires lower energy consumption. Similar efficiencies were obtained for organic matter removal (higher than 90% in both cases).