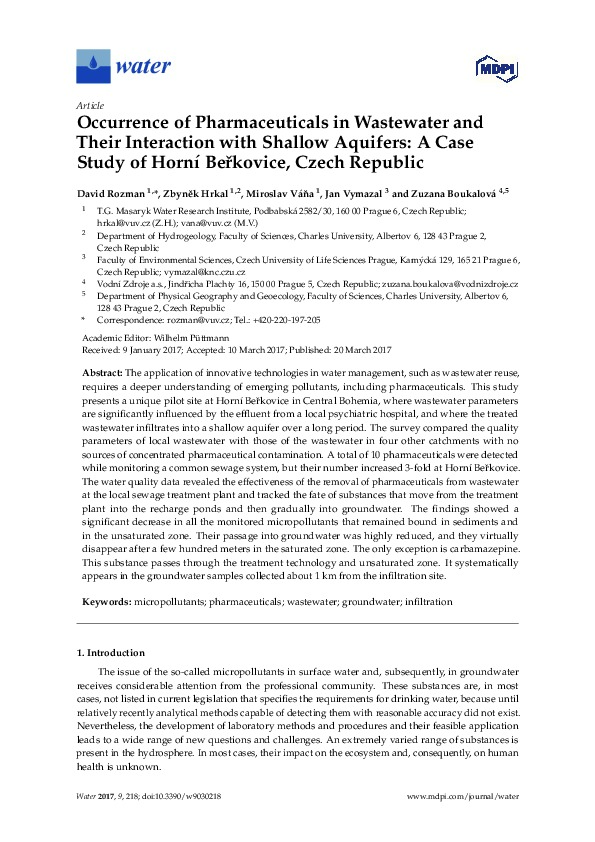 Occurrence of Pharmaceuticals in Wastewater and Their Interaction with Shallow Aquifers: A Case Study of Horní Beřkovice, Czech Republic

Abstract
The application of innovative technologies in water management, such as wastewater reuse, requires a deeper understanding of emerging pollutants, including pharmaceuticals. This study presents a unique pilot site at Horní Beřkovice in Central Bohemia, where wastewater parameters are significantly influenced by the effluent from a local psychiatric hospital, and where the treated wastewater infiltrates into a shallow aquifer over a long period.

The survey compared the quality parameters of local wastewater with those of the wastewater in four other catchments with no sources of concentrated pharmaceutical contamination. A total of 10 pharmaceuticals were detected while monitoring a common sewage system, but their number increased 3-fold at Horní Beřkovice. The water quality data revealed the effectiveness of the removal of pharmaceuticals from wastewater at the local sewage treatment plant and tracked the fate of substances that move from the treatment plant into the recharge ponds and then gradually into groundwater.

The findings showed a significant decrease in all the monitored micropollutants that remained bound in sediments and in the unsaturated zone. Their passage into groundwater was highly reduced, and they virtually disappear after a few hundred meters in the saturated zone. The only exception is carbamazepine. This substance passes through the treatment technology and unsaturated zone. It systematically appears in the groundwater samples collected about 1 km from the infiltration site.