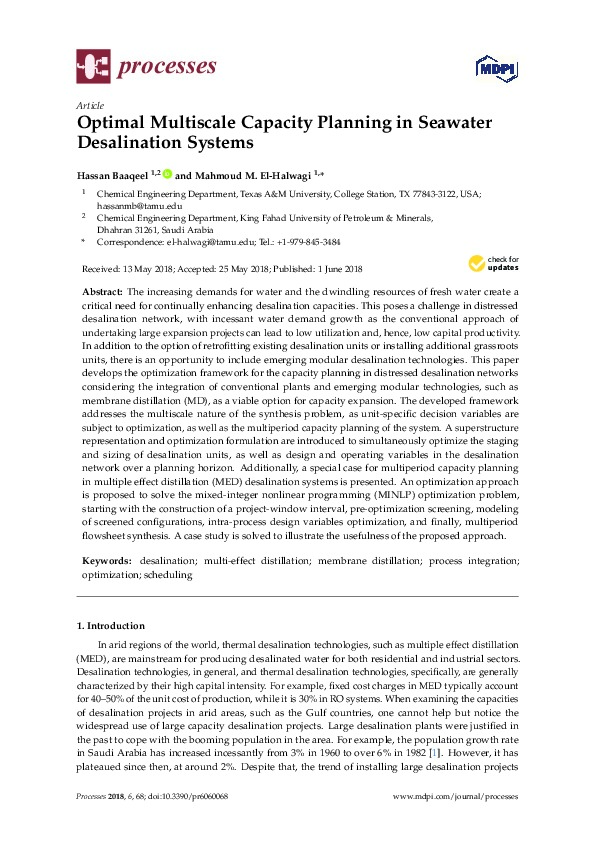 The increasing demands for water and the dwindling resources of fresh water create a critical need for continually enhancing desalination capacities. This poses a challenge in distressed desalination network, with incessant water demand growth as the conventional approach of undertaking large expansion projects can lead to low utilization and, hence, low capital productivity. In addition to the option of retrofitting existing desalination units or installing additional grassroots units, there is an opportunity to include emerging modular desalination technologies.

This paper develops the optimization framework for the capacity planning in distressed desalination networks considering the integration of conventional plants and emerging modular technologies, such as membrane distillation (MD), as a viable option for capacity expansion. The developed framework addresses the multiscale nature of the synthesis problem, as unit-specific decision variables are subject to optimization, as well as the multiperiod capacity planning of the system.

A superstructure representation and optimization formulation are introduced to simultaneously optimize the staging and sizing of desalination units, as well as design and operating variables in the desalination network over a planning horizon. Additionally, a special case for multiperiod capacity planning in multiple effect distillation (MED) desalination systems is presented.