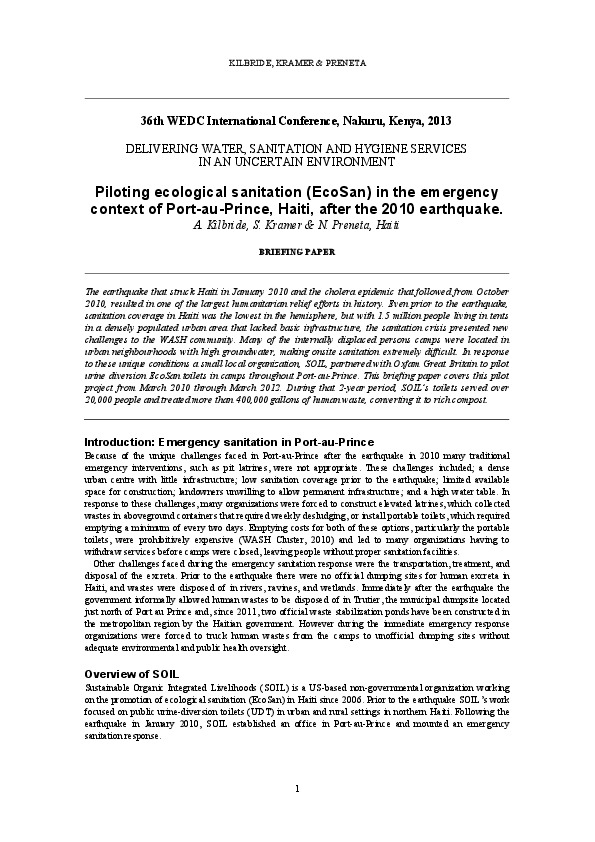 The earthquake that struck Haiti in January 2010 and the cholera epidemic that followed from October 2010, resulted in one of the largest humanitarian relief efforts in history. Even prior to the earthquake, sanitation coverage in Haiti was the lowest in the hemisphere, but with 1.5 million people living in tents in a densely populated urban area that lacked basic infrastructure, the sanitation crisis presented new challenges to the WASH community.

Many of the internally displaced persons camps were located in urban neighbourhoods with high groundwater, making onsite sanitation extremely difficult. In response to these unique conditions a small local organization, SOIL, partnered with Oxfam Great Britain to pilot urine diversion EcoSan toilets in camps throughout Port-au-Prince.

This briefing paper covers this pilot project from March 2010 through March 2012. During that 2-year period, SOIL’s toilets served over 20,000 people and treated more than 400,000 gallons of human waste, converting it to rich compost.