Production, Characterization and Treatment of Textile Effluents - A Critical Review 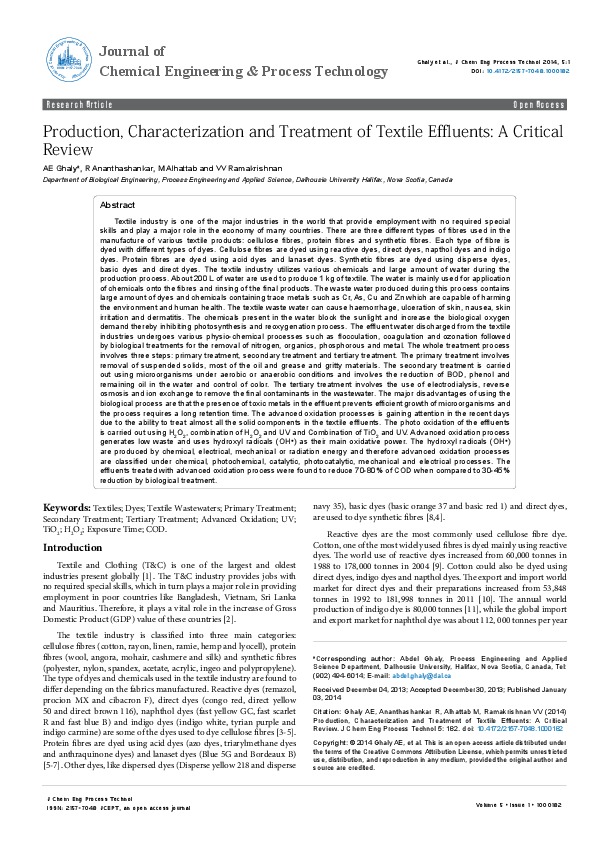 Production, Characterization and Treatment of Textile Effluents: A Critical Review

Abstract
Textile industry is one of the major industries in the world that provide employment with no required special
skills and play a major role in the economy of many countries. There are three different types offibres used in the manufacture of various textile products: cellulosefibres, protein fibres and synthetic fibres. Each type of fibre is dyed with different types of dyes. Cellulosefibres are dyed using reactive dyes, direct dyes, napthol dyes and indigo dyes. Proteinfibres are dyed using acid dyes and lanaset dyes.

Synthetic fibres are dyed using disperse dyes, basic dyesand direct dyes. The textile industry utilizes various chemicals and large amount of water during the production process. About 200 L of water are used to produce 1 kg of textile. The water is mainly used for application of chemicals onto thefibres and rinsing of the final products. The waste water produced during this process contains large amount of dyes and chemicals containing trace metals such as Cr, As, Cu and Zn which are capable of harming the environment and human health. The textilewaste water can cause haemorrhage , ulceration of skin, nausea, skin irritation and dermatitis. The chemicals present in the water block the sunlight and increase the biological oxygen demand thereby inhibiting photosynthesis and reoxygenation process.

The effluent water discharged from the textile industries undergoes various physio-chemical processes such as flocculation, coagulationand ozonation followed by biological treatments for the removal of nitrogen, organics, phosphorous and metal. The whole treatment process involves three steps: primary treatment, secondary treatmentand tertiary treatment. The primary treatment involves removal of suspended solids, most of the oil and grease and gritty materials.

The secondary treatment is carried out using microorganisms under aerobic or anaerobic conditions and involves the reduction of BOD, phenol and remaining oil in the water and control of color. The tertiary treatment involves the use of electrodialysis, reverse osmosis and ion exchange to remove the final contaminants in the wastewater. The major disadvantages of using the biological process are that the presence of toxic metals in the effluent preventsefficient growth of microorganisms and the process requires a long retention time. The advanced oxidation processesis gaining attention in the recent days due to the ability to treat almost all the solid components in the textile effluents.

The photo oxidation of the effluents is carried out using H2O2,combination of H2O2 and UV and Combination of TiO2 and UV. Advanced oxidation process generates low waste and uses hydroxyl radicals (OH●) as their main oxidative power. The hydroxyl radicals (OH●) are produced by chemical, electrical, mechanical or radiation energy and therefore advanced oxidation processes are classified under chemical, photochemical, catalytic, photocatalytic, mechanical and electrical processes.