Sulfate Radicals-Based Technology as a Promising Strategy for Wastewater 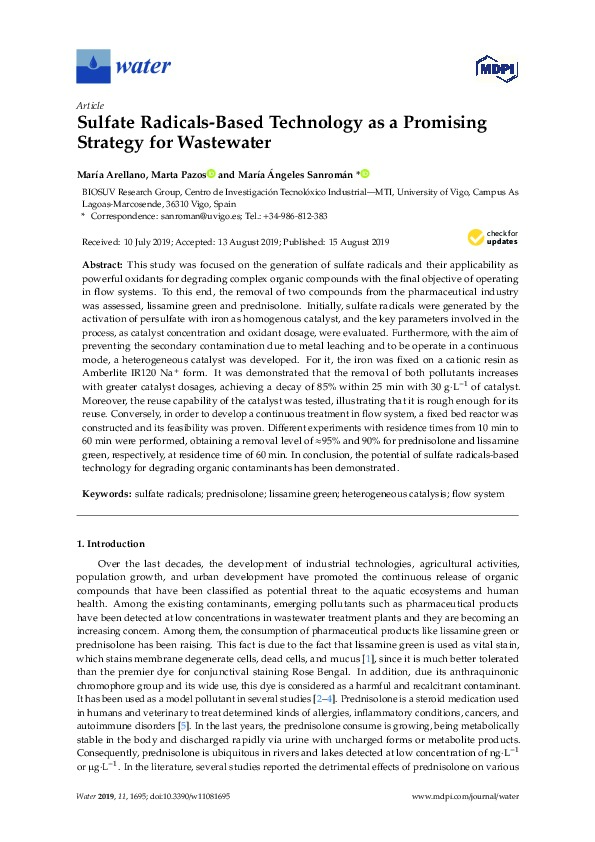 Sulfate Radicals-Based Technology as a Promising Strategy for Wastewater

This study was focused on the generation of sulfate radicals and their applicability as powerful oxidants for degrading complex organic compounds with the final objective of operating in flow systems. To this end, the removal of two compounds from the pharmaceutical industry was assessed, lissamine green and prednisolone. Initially, sulfate radicals were generated by the activation of persulfate with iron as homogenous catalyst, and the key parameters involved in the process, as catalyst concentration and oxidant dosage, were evaluated.

Furthermore, with the aim of preventing the secondary contamination due to metal leaching and to be operate in a continuous mode, a heterogeneous catalyst was developed. For it, the iron was fixed on a cationic resin as Amberlite IR120 Na+ form. It was demonstrated that the removal of both pollutants increases with greater catalyst dosages, achieving a decay of 85% within 25 min with 30 g·L−1 of catalyst. Moreover, the reuse capability of the catalyst was tested, illustrating that it is rough enough for its reuse. Conversely, in order to develop a continuous treatment in flow system, a fixed bed reactor was constructed and its feasibility was proven. Different experiments with residence times from 10 min to 60 min were performed, obtaining a removal level of ≈95% and 90% for prednisolone and lissamine green, respectively, at residence time of 60 min. In conclusion, the potential of sulfate radicals-based technology for degrading organic contaminants has been demonstrated.