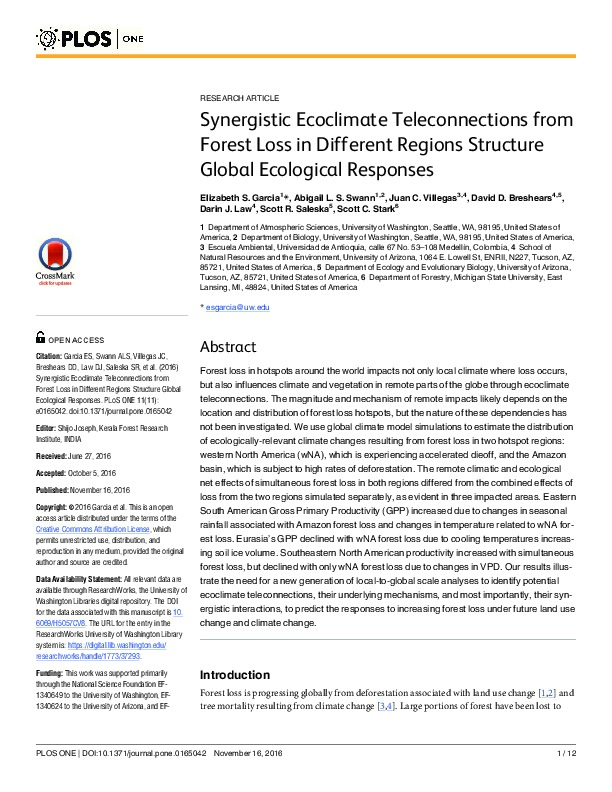 Forest loss in hotspots around the world impacts not only local climate where loss occurs, but also influences climate and vegetation in remote parts of the globe through ecoclimate teleconnections.

The magnitude and mechanism of remote impacts likely depends on the location and distribution of forest loss hotspots, but the nature of these dependencies has not been investigated. We use global climate model simulations to estimate the distribution of ecologically-relevant climate changes resulting from forest loss in two hotspot regions: western North America (wNA), which is experiencing accelerated dieoff, and the Amazon basin, which is subject to high rates of deforestation.

The remote climatic and ecological net effects of simultaneous forest loss in both regions differed from the combined effects of loss from the two regions simulated separately, as evident in three impacted areas. Eastern South American Gross Primary Productivity (GPP) increased due to changes in seasonal rainfall associated with Amazon forest loss and changes in temperature related to wNA forest loss.

Eurasia’s GPP declined with wNA forest loss due to cooling temperatures increasing soil ice volume. Southeastern North American productivity increased with simultaneous forest loss, but declined with only wNA forest loss due to changes in VPD. Our results illustrate the need for a new generation of local-to-global scale analyses to identify potential ecoclimate teleconnections, their underlying mechanisms, and most importantly, their synergistic interactions, to predict the responses to increasing forest loss under future land use change and climate change.