Trends in Atmospheric Patterns in California 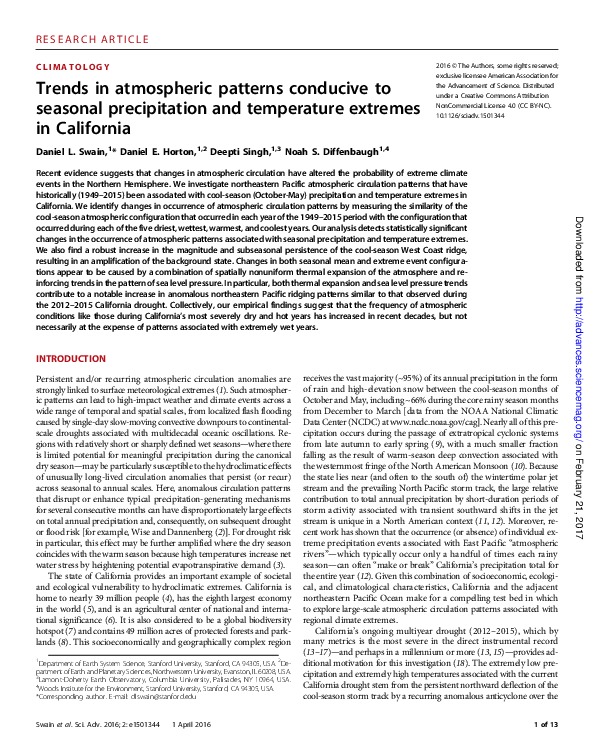 Trends in atmospheric patterns conducive to seasonal precipitation and temperature extremes in California.

Recent evidence suggests that changes in atmospheric circulation have altered the probability of extreme climate events in the Northern Hemisphere. We investigate northeastern Pacific atmospheric circulation patterns that have historically (1949–2015) been associated with cool-season (October-May) precipitation and temperature extremes in California.

We identify changes in occurrence of atmospheric circulation patterns by measuring the similarity of the cool-season atmospheric configuration that occurred in each year of the 1949–2015 period with the configuration that occurred during each of the five driest, wettest, warmest, and coolest years. Our analysis detects statistically significant changes in the occurrence of atmospheric patterns associated with seasonal precipitation and temperature extremes.

We also find a robust increase in the magnitude and subseasonal persistence of the cool-season West Coast ridge, resulting in an amplification of the background state. Changes in both seasonal mean and extreme event configurations appear to be caused by a combination of spatially nonuniform thermal expansion of the atmosphere and reinforcing trends in the pattern of sea level pressure. In particular, both thermal expansion and sea level pressure trends contribute to a notable increase in anomalous northeastern Pacific ridging patterns similar to that observed during the 2012–2015 California drought.

Collectively, our empirical findings suggest that the frequency of atmospheric conditions like those during California’s most severely dry and hot years has increased in recent decades, but not necessarily at the expense of patterns associated with extremely wet years.