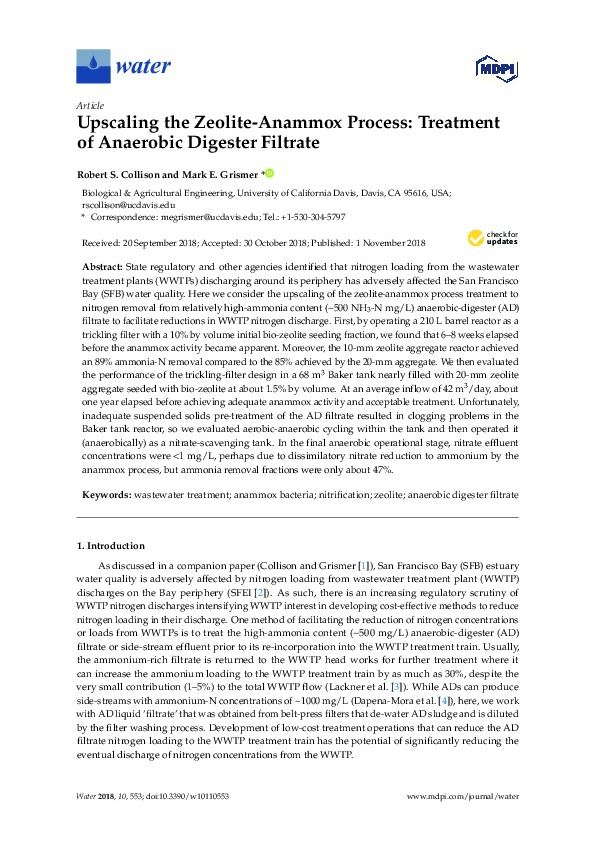 First, by operating a 210 L barrel reactor as a trickling filter with a 10% by volume initial bio-zeolite seeding fraction, we found that 6–8 weeks elapsed before the anammox activity became apparent. Moreover, the 10-mm zeolite aggregate reactor achieved an 89% ammonia-N removal compared to the 85% achieved by the 20-mm aggregate. We then evaluated the performance of the trickling-filter design in a 68 m3Baker tank nearly filled with 20-mm zeolite aggregate seeded with bio-zeolite at about 1.5% by volume.

At an average inflow of 42 m3/day, about one year elapsed before achieving adequate anammox activity and acceptable treatment. Unfortunately, inadequate suspended solids pre-treatment of the AD filtrate resulted in clogging problems in the Baker tank reactor, so we evaluated aerobic-anaerobic cycling within the tank and then operated it (anaerobically) as a nitrate-scavenging tank. In the final anaerobic operational stage, nitrate effluent concentrations were