Use of Nanoparticles for the Disinfection of Desalinated Water 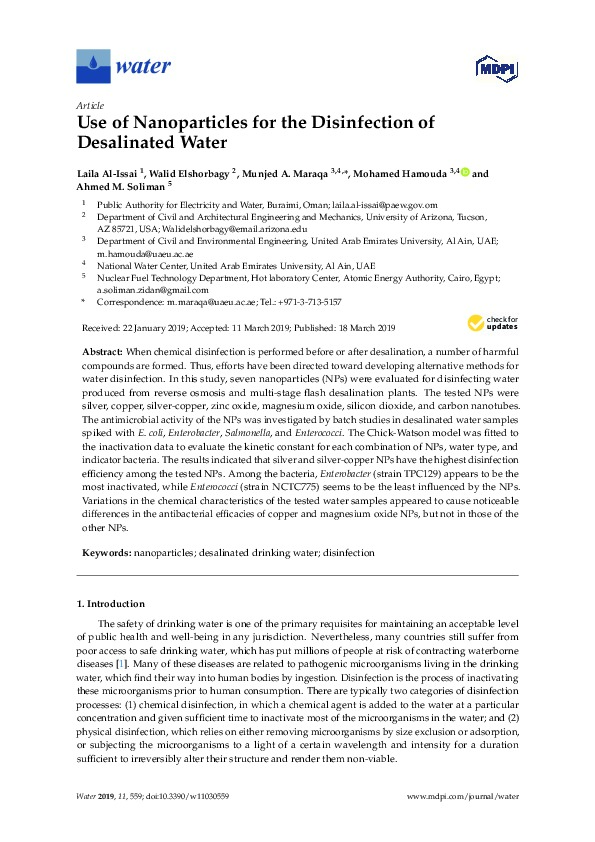 Use of Nanoparticles for the Disinfection of Desalinated Water

When chemical disinfection is performed before or after desalination, a number of harmful compounds are formed. Thus, efforts have been directed toward developing alternative methods for water disinfection. In this study, seven nanoparticles (NPs) were evaluated for disinfecting water produced from reverse osmosis and multi-stage flash desalination plants. The tested NPs were silver, copper, silver-copper, zinc oxide, magnesium oxide, silicon dioxide, and carbon nanotubes. The antimicrobial activity of the NPs was investigated by batch studies in desalinated water samples spiked with E. coli, Enterobacter, Salmonella, and Enterococci. The Chick-Watson model was fitted to the inactivation data to evaluate the kinetic constant for each combination of NPs, water type, and indicator bacteria.

The results indicated that silver and silver-copper NPs have the highest disinfection efficiency among the tested NPs. Among the bacteria, Enterobacter (strain TPC129) appears to be the most inactivated, while Enterococci (strain NCTC775) seems to be the least influenced by the NPs. Variations in the chemical characteristics of the tested water samples appeared to cause noticeable differences in the antibacterial efficacies of copper and magnesium oxide NPs, but not in those of the other NPs.