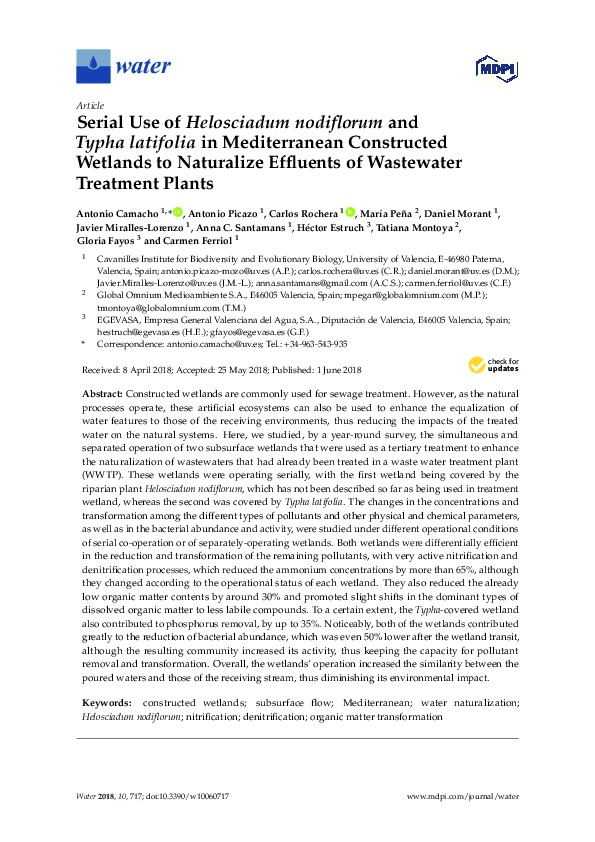 Abstract
Constructed wetlands are commonly used for sewage treatment. However, as the natural processes operate, these artificial ecosystems can also be used to enhance the equalization of water features to those of the receiving environments, thus reducing the impacts of the treated water on the natural systems. Here, we studied, by a year-round survey, the simultaneous and separated operation of two subsurface wetlands that were used as a tertiary treatment to enhance the naturalization of wastewaters that had already been treated in a waste water treatment plant (WWTP).

These wetlands were operating serially, with the first wetland being covered by the riparian plant Helosciadum nodiflorum, which has not been described so far as being used in treatment wetland, whereas the second was covered by Typha latifolia. The changes in the concentrations and transformation among the different types of pollutants and other physical and chemical parameters, as well as in the bacterial abundance and activity, were studied under different operational conditions of serial co-operation or of separately-operating wetlands.

Both wetlands were differentially efficient in the reduction and transformation of the remaining pollutants, with very active nitrification and denitrification processes, which reduced the ammonium concentrations by more than 65%, although they changed according to the operational status of each wetland. They also reduced the already low organic matter contents by around 30% and promoted slight shifts in the dominant types of dissolved organic matter to less labile compounds.

To a certain extent, the Typha-covered wetland also contributed to phosphorus removal, by up to 35%. Noticeably, both of the wetlands contributed greatly to the reduction of bacterial abundance, which was even 50% lower after the wetland transit, although the resulting community increased its activity, thus keeping the capacity for pollutant removal and transformation. Overall, the wetlands’ operation increased the similarity between the poured waters and those of the receiving stream, thus diminishing its environmental impact.