Water Management in Urban Sprawl Typologies in the City of Alicante 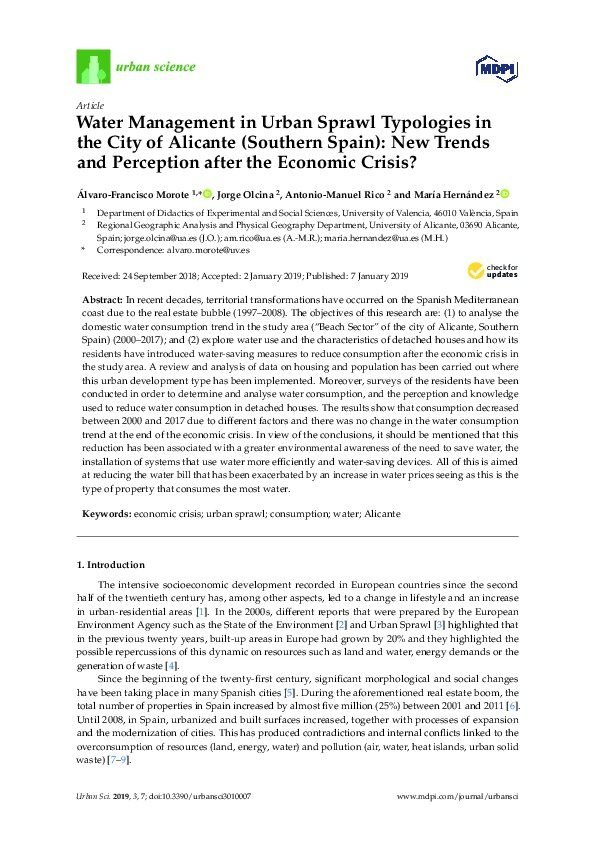 Water Management in Urban Sprawl Typologies in the City of Alicante (Southern Spain): New Trends and Perception after the Economic Crisis?

In recent decades, territorial transformations have occurred on the Spanish Mediterranean coast due to the real estate bubble (1997–2008). The objectives of this research are:

A review and analysis of data on housing and population has been carried out where this urban development type has been implemented. Moreover, surveys of the residents have been conducted in order to determine and analyse water consumption, and the perception and knowledge used to reduce water consumption in detached houses.

The results show that consumption decreased between 2000 and 2017 due to different factors and there was no change in the water consumption trend at the end of the economic crisis. In view of the conclusions, it should be mentioned that this reduction has been associated with a greater environmental awareness of the need to save water, the installation of systems that use water more efficiently and water-saving devices. All of this is aimed at reducing the water bill that has been exacerbated by an increase in water prices seeing as this is the type of property that consumes the most water.