Water Use in Electricity Generation for Water-energy Nexus Analyses: The European Case 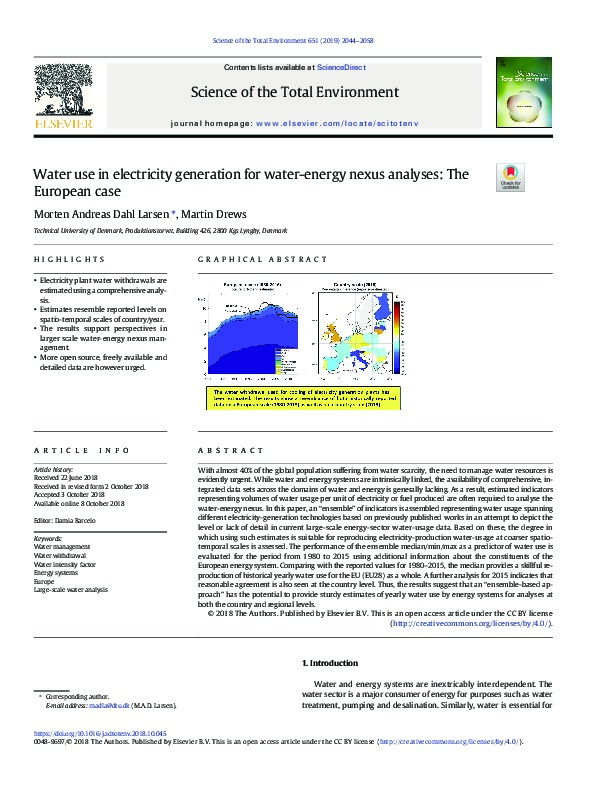 Water use in electricity generation for water-energy nexus analyses: The European case

With almost 40% of the global population suffering from water scarcity, the need to manage water resources is evidently urgent. While water and energy systems are intrinsically linked, the availability of comprehensive, integrated data sets across the domains of water and energy is generally lacking. As a result, estimated indicators representing volumes of water usage per unit of electricity or fuel produced are often required to analyse the water-energy nexus. In this paper, an “ensemble” of indicators is assembled representing water usage spanning different electricity-generation technologies based on previously published works in an attempt to depict the level or lack of detail in current large-scale energy-sector water-usage data.

Based on these, the degree in which using such estimates is suitable for reproducing electricity-production water-usage at coarser spatio-temporal scales is assessed. The performance of the ensemble median/min/max as a predictor of water use is evaluated for the period from 1980 to 2015 using additional information about the constituents of the European energy system. Comparing with the reported values for 1980–2015, the median provides a skillful reproduction of historical yearly water use for the EU (EU28) as a whole. A further analysis for 2015 indicates that reasonable agreement is also seen at the country level. Thus, the results suggest that an “ensemble-based approach” has the potential to provide sturdy estimates of yearly water use by energy systems for analyses at both the country and regional levels.