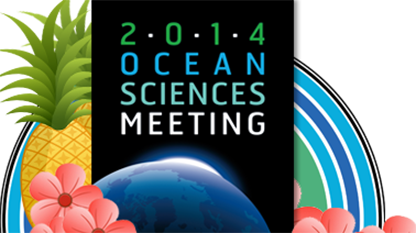 The 17th biennial Ocean Sciences Meeting , co-sponsored by the Association for the Sciences of Limnology and Oceanography (ASLO), The Oceanography Society (TOS), and the American Geophysical Union (AGU), will be held at the Hawaii Convention Center in Honolulu from 23-28 February 2014. The Ocean Sciences Meeting (OSM) is an important venue for scientific exchange across broad marine science disciplines. Sessions will include all aspects of oceanography , especially multidisciplinary topics, as well as presentations that reflect new and emerging research on the global ocean and society, including science education, outreach and public policy. The OSM originated in 1982 as a joint effort between AGU and ASLO, TOS joined as a regular co-sponsor in 2004.

Increasing evidence of multiple human impacts on the oceans makes this is a critical time for the largest international assembly of ocean scientists, engineers, students, educators, policy makers, and other stake holders to gather and share their results on research, application of research, and education. What better place to hold the meeting than an island in the middle of the Pacific Ocean, where there is emphasis on mauka to makai (ridge to reef) connection, the ultimate in ecosystem-based management; where there is interest in combining traditional knowledge with science-based understanding; where islands are in threat of disappearing from sea level rise; and where East and West can easily meet? Throughout their history, Hawaiians have demonstrated a thorough understanding of sustainability with an approach to land and water use that allowed them to self-sustain nearly one million islanders. Today they build on that heritage with innovations in science and clean energy. Hawaii is a place where interdependence and sustainability are both historic and necessary.