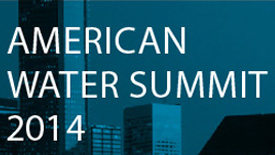 The American Water Summit , now in its 5th year, is the only event in the water calendar that focuses entirely on the business of water in North America. The Summit brings together 400 top executives and thought leaders from the public and private sectors in a format that is geared toward maximum networking return as well as the discussion of cutting-edge ideas.

The Summit will be attended by a wide range of industry stakeholders, including public and private utilities, consulting engineers, contractors, water technology and service companies, industrial water users, banks, investment funds, oil & gas and power generation companies and state and federal government agencies. 2014 Summit will have a strong energy focus in keeping with the times and reflecting the fact that the host city is the Energy Capital of the world.

, where business units and departments operate in isolation and become stuck in their own patterns of thought and action, is a barrier to innovation and growth for the water industry and the wider economy. Everybody knows the existing infrastructure model is broken, so why is there so much resistance to alternative solutions? The problem lies in our collective failure to communicate our ideas with those of different specialties and backgrounds. The objective of the 2014 Summit is to catalyze more effective communication across all segments of the water industry and between water and energy players. This will be achieved through new networking formats and the selection of thought provoking topics and panels that challenge the status quo. You will need to bring a lot of business cards!