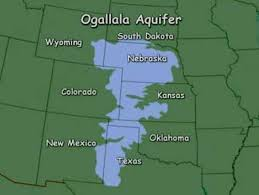 Water challenges in the Ogallala Aquifer region are the focus of a virtual summit set for Feb. 24-25.

The Ogallala Aquifer Virtual Summit, designed to tackle issues faced by communities that rely on the declining Ogallala Aquifer resource, is set for Feb. 24-25, almost a year after it was originally scheduled.

The online program will consist of a series of highly interactive conversations scheduled from 8 a.m. to noon on both days. Advance registration is required, and can be done at https://bit.ly/39oj321. Cost for the summit is $40; the fee for producers and students attending the two-day event is $20.

This summit provides producers and other water management leaders an opportunity to connect and hear from one another on many important dimensions of the water-dependent future of this region, said Brent Auvermann, Ph.D., program coordinator and Texas A&M AgriLife Research and Extension Center director, Amarillo.

“Although our focus remains the same as we originally planned — asking tough questions, especially about the human dimension of conserving the Ogallala — we’ve condensed the program and reworked it from top to bottom to ensure that participants have a rewarding, engaging Zoom experience,” Auvermann said.

This event is being led by the U.S. Department of Agriculture Ogallala Water Coordinated Agriculture Project team, along with Texas A&M AgriLife, Kansas Water Office and USDA’s Agriculture Research Service-supported Ogallala Aquifer Program with support from individuals in all eight Ogallala states.

Participants from each of the eight states overlying the Ogallala Aquifer will be represented: South Dakota, Nebraska, Kansas, Colorado, Wyoming, Oklahoma, New Mexico and Texas.

“We’d far rather have had the summit live and in person here in Amarillo, but it wasn’t in the cards,” Auvermann said. “There has been so much on-line activity during the pandemic, though, that we’ve learned a lot about how to make it stimulating and interactive.”

Through panels and facilitated workshops, participants will discuss and identify actionable activities and priorities that could benefit producers, communities and this critical groundwater resource, he said.

For example, what on-farm, district or state-level decisions and policies could support shifts in water management to ensure future generations will be able to continue to farm and live in the Ogallala region? What can be done so that rural communities remain vital in parts of the region where aquifer depletion means irrigated agriculture will no longer serve as much of an economic backbone in coming years or decades?

“Researchers around the world are learning that although advances in irrigation technology are vitally important, they are not enough by themselves to help us conserve a depletable resource like the Ogallala,” Auvermann said.

“What we need are advances in the human dimension of conservation — policies and market frameworks that create space for innovative, voluntary, collective action,” he said. “We need to experiment. Individual states and their smaller, political subdivisions are great laboratories for that kind of experimentation.”

Topics covered during the summit will include updates on projects, new programs, activities and policies that were inspired at least in part due to the Summit held in Garden City, Kan., in 2018.

Participants will share their expertise and identify opportunities and gaps requiring attention, resources and expanded collaboration within and across state lines to benefit agriculture and the region’s communities. A detailed list of speakers and topics is available at https://bit.ly/39oj321.

“Water conservation technologies are helpful, and we need more of them, but human decision-making is the real key to conserving the Ogallala,” Auvermann said. “The emergence of voluntary associations among agricultural water users to reduce groundwater use is an encouraging step, and we need to learn from those associations’ experiences with regard to what works and what doesn’t, and what possibilities exist that don’t require expanding the regulatory state.”