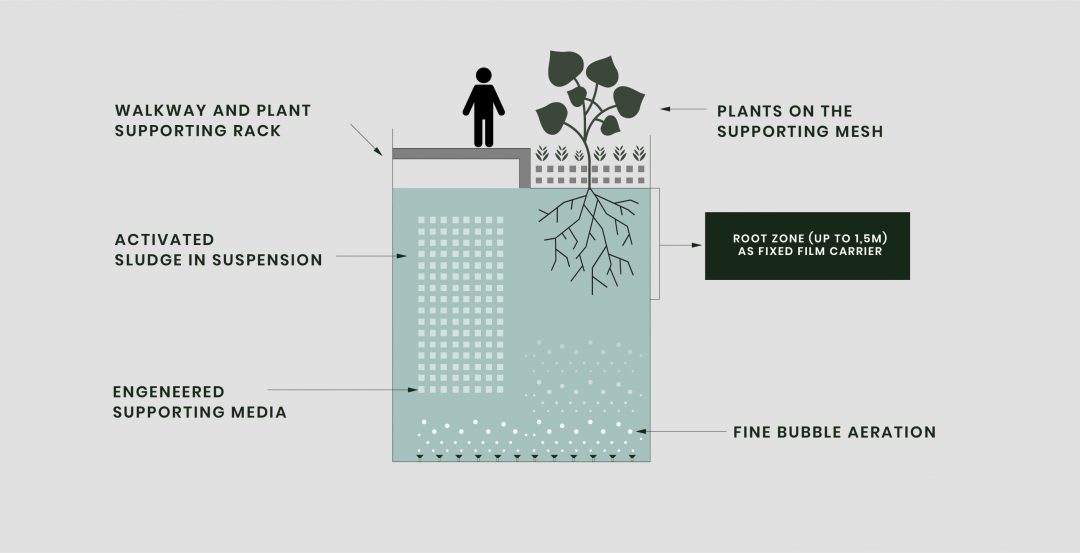 The  Organica Food Chain Reactor (FCR) facility is a type of  Fixed-Film Activated Sludge  system using natural (plant roots) as well as engineered media (inspired by root structures) to allow growth of robust and healthy biomass that effectively gobbles up the incoming load in the effluent.

The plants – via their roots – not only provide a huge amount of surface area, but they also complete the food chain that exists in the biological reactors, thereby enabling a diverse ecology and resilient biofilm that is able to handle a higher amount of fluctuations in influent quality and quantity compared to conventional suspended or attached growth systems.

The biological treatment step is accomplished via a series of reactors, whose number and size depends on a variety of factors including influent wastewater characteristics, effluent requirements, temperature, and the capacity of the wastewater treatment plant (WWTP).

The biological stage is preceded with a standard pre- treatment step and followed by phase separation and final polishing to meet the client’s specific effluent requirements.

The biological reactors in an Organica FCR are arranged in a cascade configuration, each with specially designed Biomodules, in order to optimize the development of distinct ecosystems in each step of the treatment process.

Following primary treatment, the influent travels through the biological cascade, and in doing so the nutrient content is consumed by biofilm cultures that live on both the engineered (Organica’ s proprietary biofiber media) and natural (plant roots) media in each reactor.

As a result of the cascade design the composition of the ecosystem fixed in the biofilm changes from reactor to reactor, adapting itself to the decreasing nutrient concentrations, thus maximizing the decomposition of contaminants and enabling Organica FCR WWTPs to treat wastewater in the least amount of space, using as little energy as possible.

Organica’s team of trained “wastewater” architects are able to study the surrounding area around the potential site and customize the layout, façade, and accessibility of the Organica Wastewater Facility to fulfill practical requirements for plant operation and ensure the facility blends in with the surrounding landscape, increasing land value and at the same time making it greener in both senses of the word.

Like all Fixed-Film systems, the Organica FCR is based on the same Activated Sludge process that has been used to treat wastewater for nearly a century, whereby micro-organisms and bacteria consume the contaminants in wastewater. Organica FCR drastically improves this process by leveraging a fixed-bed biofilm that grows on both natural (plant) and engineered (patented biofiber media) root structures in cascading reactor design, allowing a much greater quantity and diversity of organisms to thrive in the same physical space. For this reason, Organica FCR can be considered part of a narrower category of Fixed-Film systems called Fixed-Bed Biofilm Activated Sludge (FBAS), which essentially separates “moving” fixed film systems (like MBBR) from fixed systems like Organica.  Organica also offers Organica FCR Hybrid, which is a variation of Organica FCR that utilized both fixed biofilm and suspended (floating) microorganisms. This is often referred to as an IFAS (Integrated Fixed Film Activated Sludge) System.