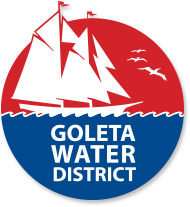 The District's mission is to provide a reliable supply of quality water at the most reasonable cost to the present and future customers within the Goleta Water District.

Established on November 17, 1944, the Goleta Water District encompasses an area extending along the south coast of Santa Barbara County west from the Santa Barbara city limits to El Capitan. The District, which spans approximately 29,000 acres, is bound on the south by the ocean and on the north by the foothills of the Santa Ynez mountains. GWD uses 270 miles of pipeline to provide water to approximately 87,000 people.

The District operates under the general direction of an elected five-member Board of Directors. The terms of office are four years, and elections for two or three directors are held every two years. The Board meets on the second Tuesday of each month, and these meetings are open to the public.

The Board employs a General Manager to manage approximately 60 people who carry out a variety of District functions. These include meter installation and repair, water quality testing, infrastructure development and maintenance, customer support, conservation activities, and applications for new water service.

The Board also determines water rates. GWD rates have consistently remained among the lowest on the South Coast for both urban and agricultural customers.

Although the District strives to maintain the lowest possible rates, it also prides itself on providing customers with friendly, high-level service. GWD offer around-the-clock support to personally address your comments, questions and suggestions. Customers can reach the District 24 hours a day at 964-6761.