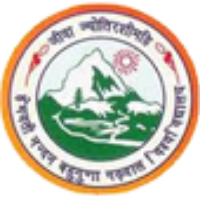 Hemvati Nandan Bahuguna Garhwal University was established as a State University vide U.P. State Government notification no. (10)/(865)/15/(75)(85)/64 dated 23 November 1973. It has a rare distinction of taking birth through a powerful popular movement during early seventies in last century. This movement symbolized the hopes and aspirations of the masses of the region of Garhwal for the development through the instrument of higher education. The people of this remote mountainous region agitated for opening a University at a small but historic semi rural town of Srinagar. It was an expression of the quest for empowering their future generations for overcoming endemic economic and social backwardness, geographic and environmental constrains, re-assertion of cultural identity and harnessing of the local natural and human resources for development.


The University has subsequently been upgraded to Central University by an Act of Parliament i.e. the Central Universities Act 2009. The University has thus been entrusted with new responsibilities to guide its students, faculty and all other stakeholders to achieve excellence in academics and strive for all round development of students. Since its inception, the University has shown commitment towards regional and community development which is inherent in its teaching courses, research agenda and other outreach and extension initiatives. The synergy derived from circumstances of its genesis still inspires and promotes its vision for future.

The University has three Campuses distantly located from each other -